Has frozen over. Or, as least the water lines coming out of it have…

No water for us!

High-tech fix: put a hair dryer under the well cover and let it run for two hours. Fixed!

Water people came back out to do a top-to-bottom video inspection of the well. They wanted to see if there is water coming in anywhere but that one dirty source at 90′.

As the county water inspector rightly surmised, blocking that source would leave the whole 600 feet of the well without any water at all.

The people who drilled the well probably knew this all along. When drilling it, they would’ve found that one source pretty quickly, noticed that it wasn’t the best looking water, and kept drilling for another 500 feet, hoping to find something better.

So, our options are to keep drilling farther down in the existing well or drill an entirely new well. A new well will probably cost north of $10K.

Water people have some new slick radar/sonic/magic device that can help identify water sources in rock without having to drill into them. That should increase the chances of hitting water in either situation. They’ve never used it though. We volunteered our house for them to train on, if they’ll give us a discount!

If we do drill another one, what happens to the existing well? We’d probably want to fill it in so that nothing important falls down it. It’s close to 600 feet deep, so you might think it would take a lot of stuff to fill it up. But, is it? The hole is only about six inches in diameter. Which is 339 cubic inches per foot. 203,575 cubic inches for the whole well. There are 46,656 cubic inches in a cubic yard, so that makes 4.4 cubic yards of hole to fill. That’s about a third of an average dump truck’s carrying capacity. Maybe $150 worth of gravel (plus delivery charge) would do it.

Our well water has been running clear ever since they last hit it with chlorine. The Cl is mostly gone now, and I actually drank some of the water last weekend!

Today was the day the water people were to come out to our house and install a liner in our well, to block the ugly water that’s coming in at 90 feet. So, they came out, with the county well inspector this time, to install that liner.

Our checkbook was hiding under the bed, with Tricksey, in fear. This was not going to be cheap.

Well, Mr. county well inspector said “Hey, if you block that water coming in at 90 feet, you’re going to block most, if not all, of the water coming into the well. I can’t allow you to do that.”

Well people are all like, “Well, OK then. Back to the drawing board! See ya!”

And because they opened the well, they had to hit it with chlorine again. So, it’s back to being toxic for a while.

This is not going according to plan.

A neighbor of ours just happens to be in the household water biz and she came by to test our water for chlorine. Yes indeed, there is a ton of chlorine in our water right now.

As soon as I told her that we had a crew out looking at the well, she knew exactly where the Cl came from. Whenever they open a well for any kind of maintenance, they’ll hit it with some chlorine to kill any contamination they may have introduced!

And it did a hell of a job of clearing out the iron-eating bacteria!

But the water people never told us they were going to do that.

Yesterday, our water cleared up. It went from cloudy and orange to basically fine, and it made this change in a matter of hours. It also smells faintly of chlorine.

Two weeks without reliable water in the house. We’ve been buying 2.5gal jugs of clean water from the grocery store. The water is not as terrible as last week, but it’s still cloudy and orange, and varies minute to minute. It’s definitely not good enough to drink or shower in, so I’ve been showering at work. But we’ve given up trying to protect the pipes from whatever is in the water, and are now OK with using toilets at least – the alternative was a drag.

We had some water treatment/well repair people out on Wednesday and they sent a camera down the well to see what was going on. They had to run the water out of the well as the camera dropped, and a lot of time was spent waiting for the water level to drop. But, that’s how it works.

The casing at the top of the well, which is there to stabilize things and to prevent ground water from getting in, looked OK. But that only goes down to 60 feet or so, IIRC. Past that, there were a couple of spots where we could see murky water running into the well, and some staining on the rock that suggests it could be a source of the problem. That was at 90′. They saw the water coming in on the camera’s way down, but on its way back up, that water had slowed. So, that could mean it was just a crevice where the well’s bad water was collecting, and emptied out when the water level dropped. Or it could mean it’s an actual source of bad water but which flows at a variable rate.

They were able to go down to ~150′ with the camera. After that it became impossible to navigate the camera around the metal brackets that are installed every few dozen feet to hold the tubes and wires that connect the pump to the surface. But the well is like 400-450′ deep so anything could be happening down there.

We’re waiting for them to get back to us, but we assume they’re going to recommend adding additional casing to seal off that spot at 90′. No idea what that will cost, yet. No idea if it will fix the problem or not.

Bottom line is: the well is bad. It’s probably iron and iron-eating bacteria (along with tannins and other crap). Nobody knows if we can get rid of it.

Here’s what our water looked like at 7:00PM last night.

Not coincidentally, I’m sure, it’s the color of the soil around here. 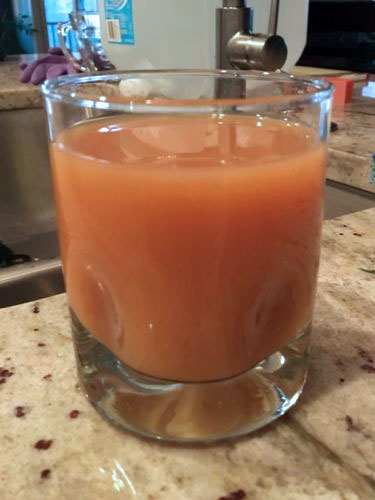 That’s considerably worse than than it’s ever looked.

Here’s what that same glass looked like at 10:00PM. 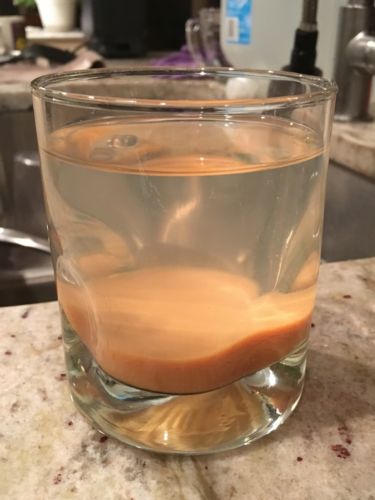 September 11, 2016, a day that will live in infamy as the first time this happened: 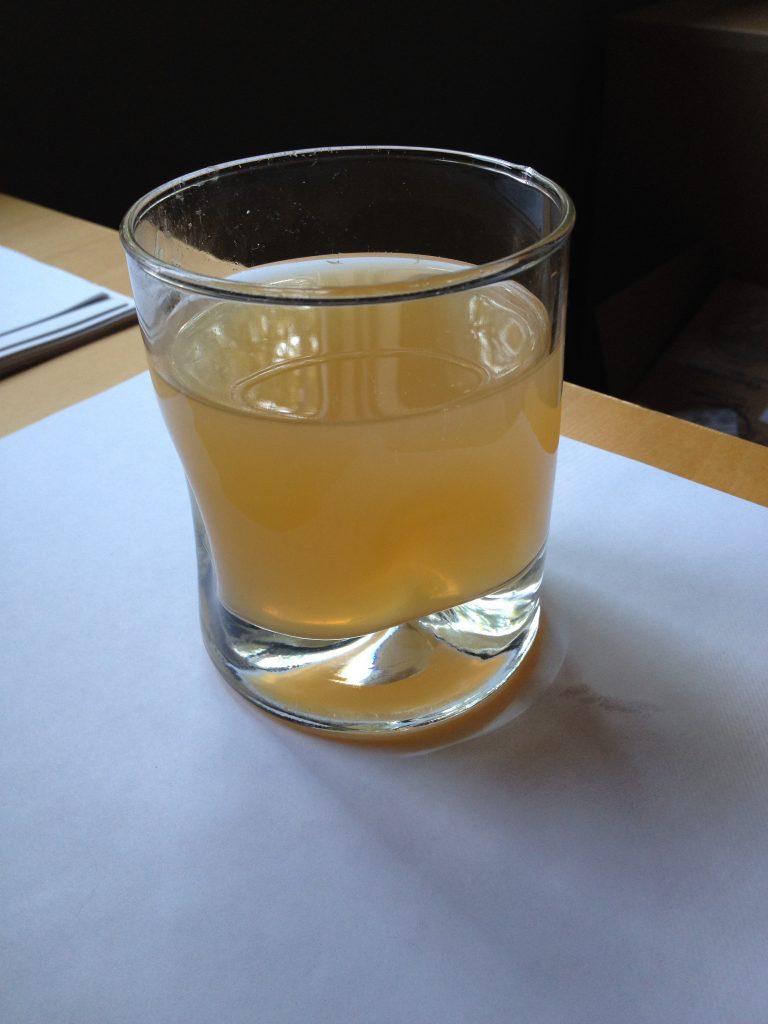 At the time, after talking with the builder, we thought the problem was that I’d used too much of the water in the well and had drained it down to the sediment.

And then it happened again in December. But we’d had a bunch of guests. And we all took showers the same morning. So we figured we’d run the well down again.

And then it happened in January, on a day when we had hardly used any water. After that, we talked to the builder again, and he talked to the well people, and they all said we need to install tanks that will hold hundreds of gallons of water; this will take the “stress” off the well since the well pump won’t have to run as often – we’ll just use the water in the tanks. How the water gets into the tanks without running the well pump and stressing the well is beyond my ability to comprehend. Plus, if any of the bad water got into the tank, it would contaminate the whole thing… all 200 or 400 gallons. Right?

And then it happened again in February. And we called the builder and he asked for a sample of the water. He had it tested and the answer was : Iron! We have iron in our water. OK. Get a filter! That works for some kinds of iron contamination, but not all.

And then it happened this Sunday. And we called the builder and he was all about the tanks again. So we called a water filtration company and they came out and tested the water. They didn’t find any iron, because the iron comes in spurts. Something happens in the well and suddenly the water around the pump is contaminated with iron. Then, after a day or so, the iron slowly settles out and the water is clear again.

They found high levels of tannins, which suggests surface water contamination. Which shouldn’t happen because wells have liners that go down a certain number of feet to prevent surface water from getting in (the pump itself is 300 feet down). This suggests a broken well casing. This could also explain the iron – clumps of iron-eating bacteria and the iron-rich dirt they live in occasionally fall into the well and turn the water into brown poison until they settle out.

And then it happened again this morning.

So now we have to drop a camera into the well and see if there’s any obvious problems with the casing. If there is, we have to try to get the well people to fix it. Nobody thinks we’re likely to succeed at that.

And, we still have to install a filter.

Until then, we have to use bottled water.

This is country life.

The water from our well woke up in a bad mood.

Actually… I broke the water. I’ve been trying to get some grass seed growing, so I’ve been watering. And I accidentally ran the well (mostly) dry. No idea how long it will take to refill and get all the sediment settled. This house is cursed.

Big smudge on the window Thursday AM. Big dead dove on the ground underneath. Little dead hummingbird under a different window.

That’s what windows with inside screens do to birds.

So, we’ve taken the feeders away.

The birds haven’t stopped coming by, though.

Here’s a female summer tanager, wondering where the seeds went. 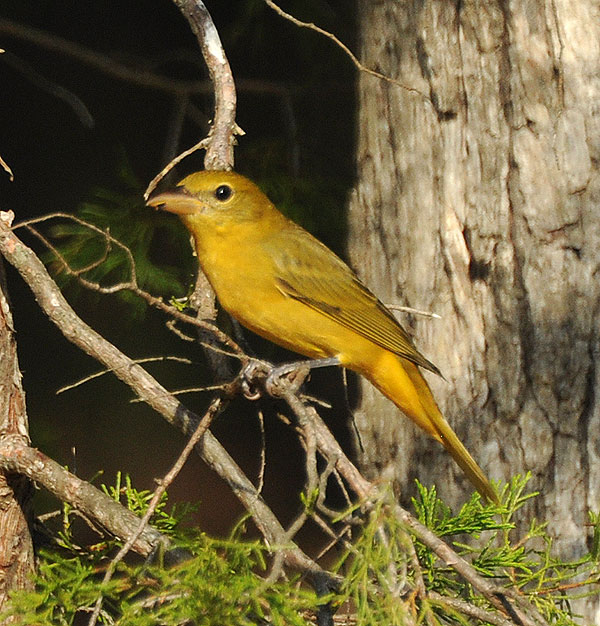