Continuing in the same spirit that caused me to post the last set of songs - that a song invisible to the world might as well not even exist - I'm going to post all the studio*-recorded songs from bands I've been in. (and because Bobby L's been posting a bunch of his stuff, I'm inspired to do the same)

There are, in my completely biased opinion, some really good songs in here, and there are also some decent performances. And there are even a couple of songs where the song and the performance are both good! And then there are some real clunkers... c'est la roche.. But I love em all, cause, well, I'm like that.

These are 96kbps MP3's, which means they sometimes sound a little tinny and strange.

Update: I had to remove the links to the individual songs, because I broke the bank on my web hosting storage limits; so you can grab all the songs, here: Nora (13MB), Hector (32MB), fieldfresh (33MB).

So, in reverse chronological order...

Nora
Nora was a short-lived band that only managed to record four songs before I ran off to get married. After I left, the band kind of disintegrated. That's unfortunate, since I think there was potential there - even without me! Belly was a big influence, as were the various British shoegazer bands (MBV, Blur, etc.).

These songs were recorded in a real studio, though because of the cost, things were a bit rushed and the mix is a bit weak - like, where's the bass? and, why didn't we fix those sloppy sections? Oh well. Two of these four ended up on red-swirled 45s that we made and then failed to sell (I still have a bunch in my closet). I think some of the other band people might have some live recordings that I'd dearly love to get my hands on - I know we had some other good songs, though they're fading from memory, fast. But, I just don't know where any of those people are these days. Jen, Mark, Gerry, Will, Me. 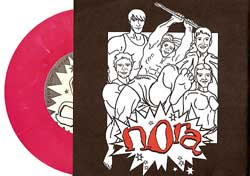 Hector
Before starting Nora, Gerry The Bassist and I were in a band called 'Hector'. Hector was a power-pop band, in the style of Big Star and late-era Replacements, formed by singer and chief-songwriter, Don, who started the band with a "guitarist wanted" ad in a local indie paper, which I answered. Unlike Nora, we recorded most of what we wrote; and we did it all in Don's basement on his 1/2" Tascam 8-track. We probably recorded more than we played out, even, which is fine - sometimes that can be just as much fun. We had two different bass players, and I think they're both on these songs, though I don't think I could tell who's who on some songs - the time line is a little fuzzy in my head, so many years out.

After the drummer, Sean, became a father and had to quit because of time demands, Gerry and I kind of walked away from the band and started Nora, without formally telling Don that we quit. Sean was a great drummer - a great natural feel - and teaching a new drummer all those songs felt like too much of a drag. It was a crappy way of handling the situation, I'll admit. But Don and I still exchange emails from time to time, so it's all cool now, I guess. Don, Sean, Gerry/Nick, Me.

fieldfresh
fieldfresh (named after the Canadian dairy company, by Joe, the founder, singer and bass player, who sometimes visits this blog), was my first official band. When we started, the only person who could really play anything was our drummer, Bobbie. She left, then we got the drummer for the RIT jazz band - who was fantastic. I was always amazed that a guy that good would play with the rest of us (which is not to slight Bobbie, but, well, JoeS was awesome). 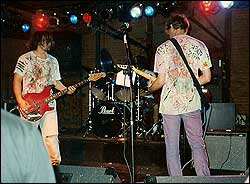 The first eight songs were recorded in the RIT music studios by a film student (who is now a developer at Borland - you can't hide from Google, Mr Stuntz). The drums sound great - very expensive microphones, IIRC - but there's a lot of effects over everything else. The effects make the finished recordings sound a lot more polished, true, but we really had more of a raw, in-your-face aesthetic, IMO. 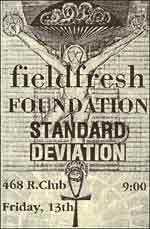 The rest of the songs, on the other hand, go all the way to the other extreme; they were recorded in a basement, live, except for vocals overdubbed later (in a film developing closet, IIRC). We were, I guess, 'grungy': Mudhoney, Sonic Youth, Dino Jr., the whole Sub-Pop scene. We played mostly RIT apartment parties, for a couple of years. Then I quit, out of the blue, one day - don't remember why. No harm done, in the long run. It couldn't last forever! Joe T., Joe S./Bobbie, Me, Jason at the very end.

Note, a lot of these songs have NSFW lyrics - if you couldn't tell from the titles.

I'm posting these without permission from any of the people who were in any of these bands. And I hope that's OK with them.

Many of these photos were done by Carla Hernandez. Two from my mother. One from my stepmother. One by Becky.

* - where 'studio' ranges from a professional studio to two mic's in a basement. That is, these aren't live shows, these are 'playing music for a tape recorder'.