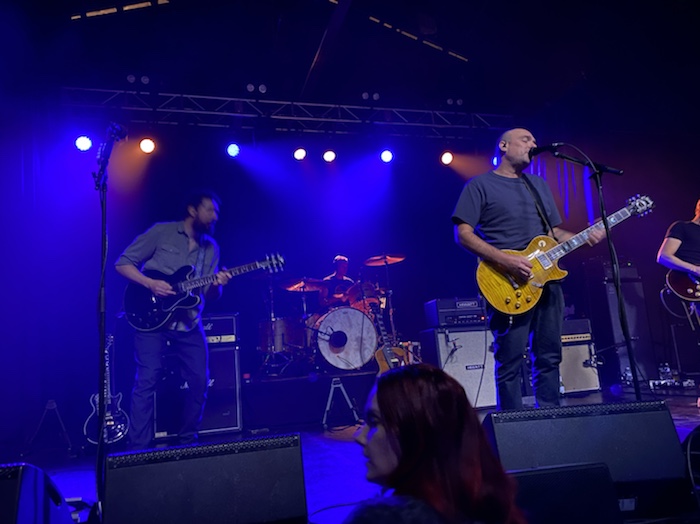 At the Orange Peel in Asheville NC.

A show I never thought would happen. Not only did they postpone it after the singer's voice went out, two weeks ago, they have pretty much been on hiatus for the last dozen years or so. I've heard interviews where members loathed other members. Two of the original members went on to play with the Foo Fighters for a while. there were solo records. Seemed like SDRE was done.

But, things came together and three of the original four members, with two new members, went on tour.

Show was originally scheduled for two weeks ago, so Mrs and I planned a whole vacation around it. Asheville is a fun town and friends of ours own a BnB there. So, we did it up right. And the day of the show, last day of our trip, we got an email that the singer had lost his voice so they had to reschedule.

Two weeks later, another road trip and another night at the BnB, it all worked out. Mrs skipped. Like most people, she'd never heard of them and wasn't up for the four hour drive then standing for four hours in one spot, in a loud crowded club, listening to music she didn't know.

They've only put out one new song in the last 14 years, so everything they played was a classic. Loud as hell. Tight. And they seemed very appreciative of the fact that so many people came out to see them. Which was nice.

The Appleseed Cast opened. I'd never heard them and happily, they were amazing- noisy in a great way.

Cathedral Bells opened for them. They were fun.

This phenomenon has arisen in other democratic and quasi-democratic countries over the past century, and it has generally been called “fascism.” Fascist movements, too, had no coherent ideology, no clear set of prescriptions for what ailed society. “National socialism” was a bundle of contradictions, united chiefly by what, and who, it opposed; fascism in Italy was anti-liberal, anti-democratic, anti-Marxist, anti-capitalist and anti-clerical. Successful fascism was not about policies but about the strongman, the leader (Il Duce, Der Führer), in whom could be entrusted the fate of the nation. Whatever the problem, he could fix it. Whatever the threat, internal or external, he could vanquish it, and it was unnecessary for him to explain how. Today, there is Putinism, which also has nothing to do with belief or policy but is about the tough man who single-handedly defends his people against all threats, foreign and domestic.

To understand how such movements take over a democracy, one only has to watch the Republican Party today. These movements play on all the fears, vanities, ambitions and insecurities that make up the human psyche. In democracies, at least for politicians, the only thing that matters is what the voters say they want — vox populi vox Dei. A mass political movement is thus a powerful and, to those who would oppose it, frightening weapon. When controlled and directed by a single leader, it can be aimed at whomever the leader chooses. If someone criticizes or opposes the leader, it doesn’t matter how popular or admired that person has been. He might be a famous war hero, but if the leader derides and ridicules his heroism, the followers laugh and jeer. He might be the highest-ranking elected guardian of the party’s most cherished principles. But if he hesitates to support the leader, he faces political death.

...
This is how fascism comes to America, not with jackboots and salutes (although there have been salutes, and a whiff of violence) but with a television huckster, a phony billionaire, a textbook egomaniac “tapping into” popular resentments and insecurities, and with an entire national political party — out of ambition or blind party loyalty, or simply out of fear — falling into line behind him.

If the words "Christian Nationalism" don't already make you wince, they should.

The Bible is just a prop for Donald Trump, and, like autocrats throughout history, he uses religion and religious leaders to consolidate the support of enraptured followers. It doesn’t really matter whether Trump himself is a Christian nationalist, since he is a salvific figure to Christian nationalists, one who can achieve their long-sought goals by crushing the “godless left” and giving them more power. One of the leading contenders to be Trump’s successor, Florida governor Ron DeSantis, is abusing his current office to engage in fascistic crackdowns on migrants, public education, and LGBTQ kids while making direct Christian nationalist appeals.

In recent political speeches, DeSantis has been using a verse from Ephesians 6 (“Put on the full armor of God, so that you can take your stand against the devil’s schemes”), but with a notable substitution: instead of “the devil’s,” he has said “the left’s.” The meaning is not lost on evangelical audiences, who are well familiar with the actual words of the verse.

A new estimate for the total number of ants burrowing and buzzing on Earth comes to a whopping total of nearly 20 quadrillion individuals.

Put another way: If all the ants were plucked from the ground and put on a scale, they would outweigh all the wild birds and mammals put together. For every person, there are about 2.5 million ants.

“As soon as the school district says ‘Hey, come back,’ I am there, first flight,” he said.

So the school district has been flummoxed about what’s happened since. They complied by offering to reinstate him, they say, and now the football season is in full swing. But Kennedy is nowhere near the sidelines.

“He’s had the paperwork for his reinstatement since August 8th, and we haven’t gotten so much as a phone call,” says Karen Bevers, spokesperson for Bremerton schools.

Instead, as the Bremerton Knights were prepping for the season in August, Kennedy was up in Alaska, meeting with former Vice President Mike Pence and evangelist Franklin Graham. On the eve of the first game, which the Knights won, Kennedy was in Milwaukee being presented with an engraved .22-caliber rifle at an American Legion convention.

The weekend of the second game, which the Knights also won, Kennedy appeared with former President Donald Trump at the Trump National Golf Club in New Jersey. He saw Trump get a religious award from a group called the American Cornerstone Institute.

Coming up this month, Kennedy’s scheduled to give a talk as part of a lectureship series at a Christian university in Arkansas.

“The record is clear that Coach Kennedy was fired for that midfield prayer,” lawyer Paul Clement told the nine justices in the first 15 seconds of the oral arguments of the case in April. The words “fired,” “fire” or “firing” were used 16 times in the hour and a half session.

It wasn’t true though. The district’s lawyers tried to correct the record, to no avail.

“You can’t sue them for failing to rehire you if you didn’t apply,” one lawyer, Mercer Island’s Michael Tierney, argued during a lower court session. “The District didn’t get an application from him, had four positions to fill and filled them with people who had applied. It didn’t fail to rehire him.”

The Supreme Court simply ignored this inconvenient fact — along with a host of others. At one point during oral arguments, as a different school district attorney was saying the narrative that had been spun didn’t fit with the facts — that the coach’s prayers were neither silent nor solitary, nor was he fired — Justice Samuel Alito interrupted him, saying “I know that you want to make this very complicated.”

I'm not a Christian, but I do find value in some of the teachings of Jesus. I read this parable again, and it is not only fitting for this situation, it is very powerful.

In reply Jesus said: "A man was going from Guatamala, fleeing a drug cartel that wanted to kill him and seize his daughters as sex slaves, when he found himself on the brink of starvation, having crossed a desert, a river, and another desert with limited supplies and no money. He went to a prosperity gospel preacher for help, but they had just had the carpets cleaned so the preacher refused him shelter. He went to the Christian governor for help, but the governor shipped him to Martha's Vineyard with no support or direction so he could own the libs. But a pinko, commie libtard saw him and took pity on him. He clothed him, and fed him, and sheltered him. He brought him to an immigration lawyer and said 'Look after him. When I return, I will reimburse you for any extra expense you may have.'

“Which of these three do you think was a neighbor to the man who fell victim to drug cartels and gangs?”

The expert in the law replied, “The bleeding heart, pinko commie libtard who had mercy on him.”

Jesus told him, “Go and do likewise.”

Jeremy David Hanson, 34, of Rossmoor, Calif., pleaded guilty to one count of interstate communication of threatening communications to commit violence against the employees of Merriam-Webster, and to another count charging the same offense, initially filed in the Eastern District of Texas, targeting the President of the University of North Texas. In a written statement of facts accompanying his plea agreement, Hanson also admitted to sending threatening communications to various corporations, politicians, and others, including the Walt Disney Co., the Governor of California and the Mayor of New York City, a New York rabbi and professors at Loyola Marymount University. Hanson also admitted that he frequently selected the object of his threatening communications because of the gender, gender identity and/or sexual orientation of various persons.

Between Oct. 2 and Oct. 8, 2021, Springfield-based Merriam-Webster, Inc. received various threatening messages and comments demonstrating bias against specific gender identities submitted through its website’s “Contact Us” page and in the comments section on its webpages that corresponded to the word entries for “Girl” and “Woman.” Authorities later identified the user as Hanson.

Specifically, on Oct. 2, 2021, Hanson used the handle “@anonYmous” to post the following comment on the dictionary’s website definition of “female:” “It is absolutely sickening that Merriam-Webster now tells blatant lies and promotes anti-science propaganda. There is no such thing as ‘gender identity.’ The imbecile who wrote this entry should be hunted down and shot.”

Hanson also sent the following threatening message via the website’s “Contact Us” page: “You [sic] headquarters should be shot up and bombed. It is sickening that you have caved to the cultural Marxist, anti-science tranny [sic] agenda and altered the definition of ‘female’ as part of the Left’s efforts to corrupt and degrade the English language and deny reality. You evil Marxists should all be killed. It would be poetic justice to have someone storm your offices and shoot up the place, leaving none of you commies alive.”