Started with this disc: 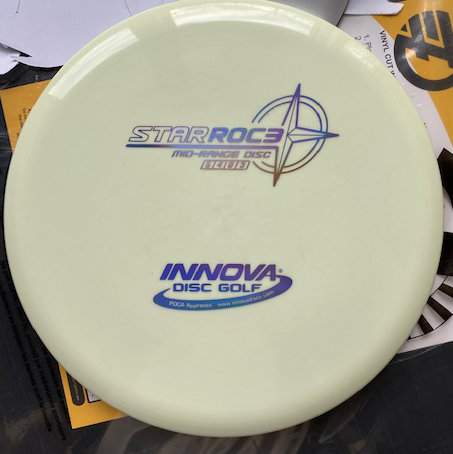 Erased the stamp, with acetone: 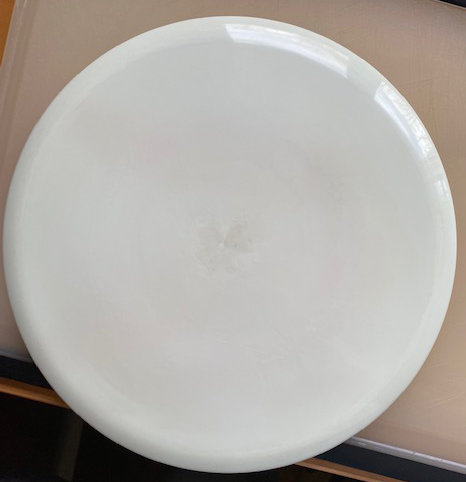 Found a sketch of the western hemisphere continents: 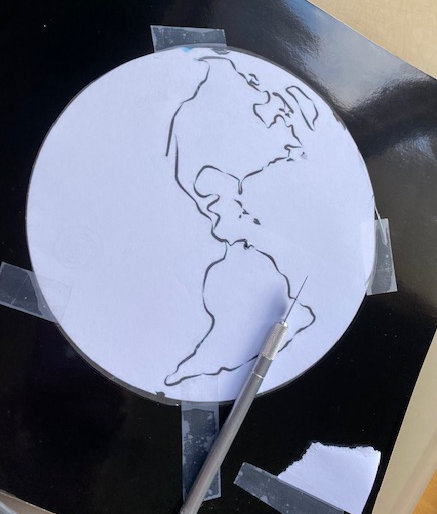 Printed that out, taped it to a piece of adhesive vinyl. Cut it out with an exacto knife: 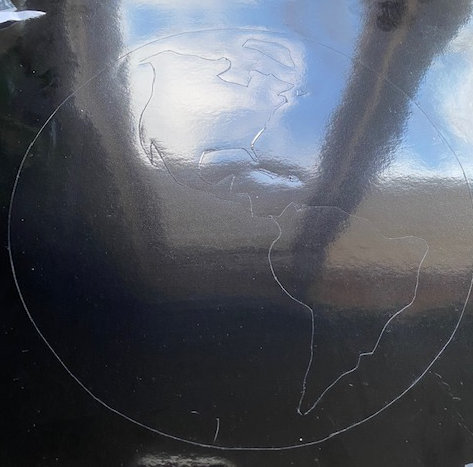 Stuck the vinyl to the disc: 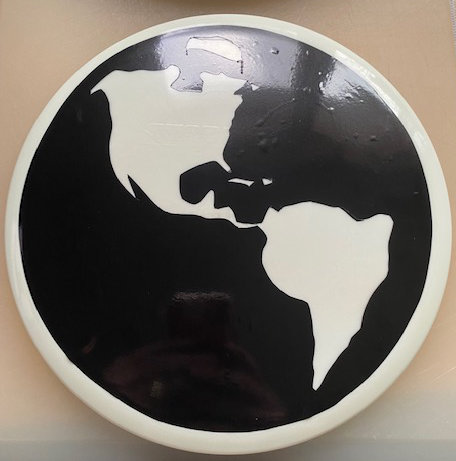 Hand-painted the continents using dye mixed with white glue. I've never hand painted a disc, and I had no idea how it would work. And I had to mix colors to get brown (blue + orange), so I didn't know what I was going to get... but, fear is the mind-killer. 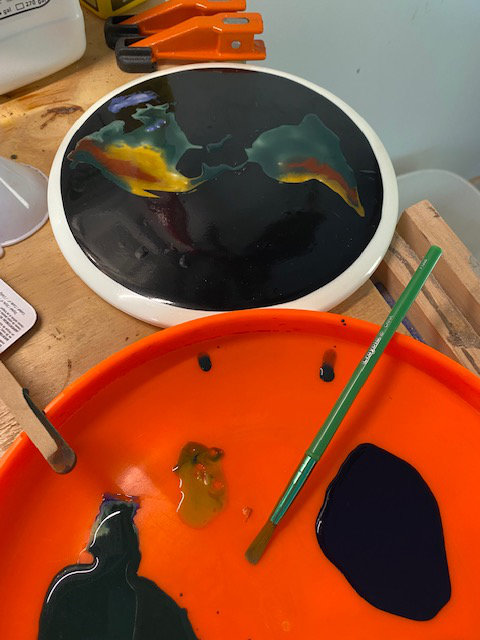 Let that sit for a few hours in a very low oven. Then, pulled it out and took off the vinyl: 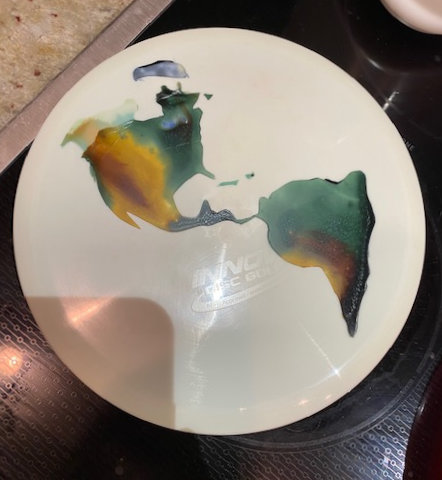 The glue had hardened and mostly stuck, except for Alaska, which ripped off. I'll fix it in post!

Mixed up a bed of blue, purple and green for water. 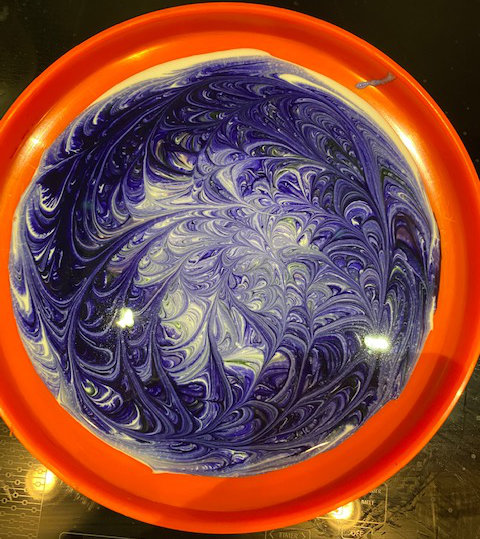 Dropped the disc in there for 20 hours. Pulled it out. Hand-touched Alaska and a few spots where air bubbles had made blanks. And... done! 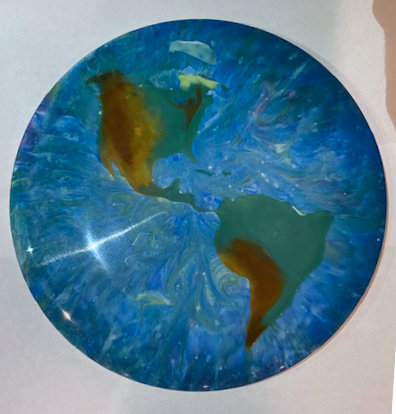 The glue on the continents had apparently dissolved into the glue bed for the water. When I took it out there was no trace of the thick glue layers. And the dye is reallllly saturated there. Not exactly what I was expecting.

I don't hate it. Learned a lot.

What if you found a simple integer overflow bug in an obscure image decoding algorithm, and used it to ... build an entire scriptable computer architecture that executes as part of the image decoder itself?

That way, your target doesn't have to do anything but receive and render your trojan image - which it will do automatically in a messaging app like iMessage - and just like that, your code is running on their computer!

JBIG2 doesn't have scripting capabilities, but when combined with a vulnerability, it does have the ability to emulate circuits of arbitrary logic gates operating on arbitrary memory [ie. it is designed to be able to apply basic logical operations on image components as it composes them -cleek]. So why not just use that to build your own computer architecture and script that!? That's exactly what this exploit does. Using over 70,000 segment commands defining logical bit operations, they define a small computer architecture with features such as registers and a full 64-bit adder and comparator which they use to search memory and perform arithmetic operations. It's not as fast as Javascript, but it's fundamentally computationally equivalent.

The bootstrapping operations for the sandbox escape exploit are written to run on this logic circuit and the whole thing runs in this weird, emulated environment created out of a single decompression pass through a JBIG2 stream. It's pretty incredible, and at the same time, pretty terrifying.

While it’s unclear just how West, ostensibly running as an independent, managed to connect almost exclusively with Republican firms—many of which had direct connections to Trump himself—his efforts were quite clearly in the hands of experienced conservatives.

There is one major exception, however. The progressive firm Millennial Strategies was one of Kanye’s largest 2020 vendors, and it’s unclear if that was a ploy to give Kanye’s campaign the air of true independence, or just a true exception.

Otherwise, Kanye’s campaign seems to have been loaded with Republican operatives.

This is what I learned Blender for.

I finished this song September 8 and then thought about what a video for it should look like for a couple of weeks. I eventually decided on something close to what you see here: a beach ball being bounced by mechanical paddles in front of a movie of the beach. Why would someone do that to a ball? Nobody knows.

I decided I needed to do that in a 3D animation app. Blender, being free, was the obvious choice. But Blender is an amazingly powerful application that is almost nothing like any application I've ever used. So the learning curve is immensely high. That's why it took my basically three months to do this scene.

The movie on the screen is made from videos of the beach I took with my phone at the end of September, and a few stills from other beach trips - that was all assembled into a single video separately in Blender.

The simple fact that I wanted to be able to see that movie projecting through the air means I had to use Blender's high-quality ray tracing renderer for this. "Suspended" used Blender's real-time renderer (in high-quality mode), which looks good, but the real-time renderer can't do the atmospheric effects needed to show light passing through cloudy air. So, while "Suspended" took a bit less than 4 hours to render two minutes, this took 102 hours to render these three minutes - 4900 frames, average of 75 seconds each. Once all the frames were rendered, I composed them and the audio into the final video, also in Blender.

The rendering process happens almost entirely on the GPU, and none of the other computers in my house have GPUs that can handle the requirements. And that's why I'm never going to fix anything in it, even though there is plenty I know I should fix. 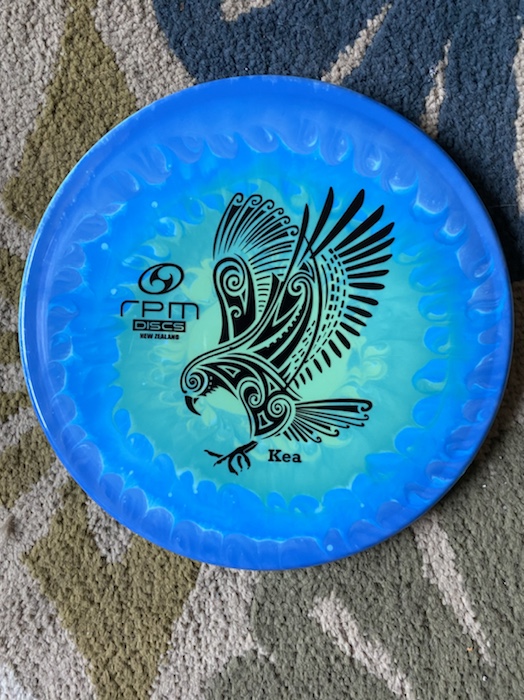 This would've been awesome. But it looks like it slid in the dye bed and came out off center. It developed a lot of air bubbles, too. Should've paid attention to that. 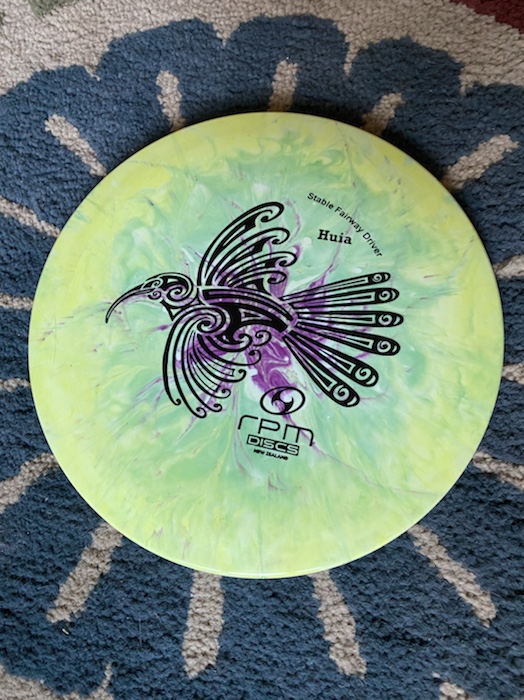 Here's a new video for Suspended Above The Sun.

All done in Blender. I'm pretty new to Blender, so it took about ten days for me to build all the animation. Took three or four hours for my PC to render it to this 124 second clip.

ATLANTA, Dec 10 (Reuters) - Weeks after the 2020 election, a Chicago publicist for hip-hop artist Kanye West traveled to the suburban home of Ruby Freeman, a frightened Georgia election worker who was facing death threats after being falsely accused by former President Donald Trump of manipulating votes. The publicist knocked on the door and offered to help.

The visitor, Trevian Kutti, gave her name but didn’t say she worked for West, a longtime billionaire friend of Trump. She said she was sent by a “high-profile individual,” whom she didn’t identify, to give Freeman an urgent message: confess to Trump’s voter-fraud allegations, or people would come to her home in 48 hours, and she’d go to jail.

Freeman refused. This story of how an associate of a music mogul pressured a 62-year-old temporary election worker at the center of a Trump conspiracy theory is based on previously unreported police recordings and reports, legal filings, and Freeman’s first media interview since she was dragged into Trump’s attempt to reverse his election loss.

So Freeman asked a neighbor to come over and talk with Kutti, who was with an unidentified male. Like Freeman, Kutti and the other visitor were Black. Kutti told the neighbor that Freeman was in danger and that she’d been sent to provide assistance. Freeman said she was open to meeting them. She asked Cobb County Police to send an officer to keep watch so she could step outside, according to a recording of her 911 call.

“They’re saying that I need help,” Freeman told the dispatcher, referring to the people at her door, “that it’s just a matter of time that they are going to come out for me and my family.”

An officer arrived and spoke with Kutti, who described herself as a “crisis manager,” according to the police incident report.

Kutti repeated that Freeman “was in danger” and had “48 hours” before “unknown subjects” turned up at her home, the report said. At the officer’s suggestion, the women agreed to meet at a police station. The officer’s report did not identify the man accompanying Kutti.

Inside the station, Kutti and Freeman met in a corner, according to footage from a body camera worn by an officer present at the meeting. Reuters obtained the video through a public-records request.

“I cannot say what specifically will take place,” Kutti is heard telling Freeman in the recording. “I just know that it will disrupt your freedom," she said, "and the freedom of one or more of your family members.”

“You are a loose end for a party that needs to tidy up,” Kutti continued. She added that “federal people” were involved, without offering specifics.

Don't you know
It's an easy thing
When it's lost

I hope our friendly neighborhood Satanists are ready to open some schools!