END_OF_DOCUMENT_TOKEN_TO_BE_REPLACED

Since I have a seven-day trial of Adobe Character Animator, I made another video with it.

It's no accident all of these faces have the same haircut. The puppets I used here and for Streetlight are all based on the demo characters that come with Character Animator. You do some facial motion capture in the app to set up the basic facial expressions, then you pick the character model (puppet) to use and it generates a puppet you can ... puppeteer?. But for some reason, no matter which (human) facial model I pick, it copies the haircut of the person doing the setup modelling - me, in this case - regardless of the haircut the character has in its preview. And I couldn't figure out how to change it.

So, this green pencil sketch ghost guy takes my DIY haircut on a tour of some of the places I went in Scotland a couple of years back: Holyrood Abbey, Portree harbor, and Robinson's Close in Edinburgh.

I made a video for "Streetlight"

And now you know.

Dry ice boiling in our sink.

One final new song. This is "Streetlight", and features Harry and Emma on vocals.

From the upcoming smash album, "Princeton Studies", here's a smooth little tune of mine called "Cleptometry".

It was performed and recorded live at a nightclub in fantastic downtown Groovesburg, NC! *

Drums and bass are lovingly-hand-crafted lines played by VSTis. Guitar and glockenspiel are real. 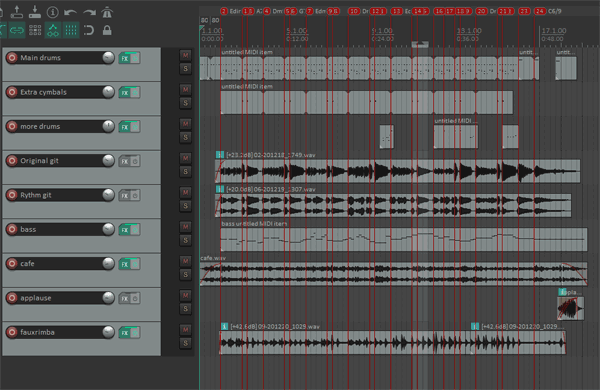 This, and Something Else, are the big hit songs from an upcoming album of mine called "Princeton Studies". In this case, it's a study in slowness, the harmonic minor scale, and transitions via augmented chords to other keys (and back).

I went and did this to my favorite Beatles song.

Thanksgiving week is always a good week for guitar.