The GOP would like you to know that you are immune from any legal consequences as long as you time your crimes so that the Senate will not be able to try your case before you leave office.

Anything you want to do, go right ahead. Nothing can stop you and nobody can touch you for it.

Then, in 1987, Trump and Ivana visited Moscow and St Petersburg for the first time. Shvets said he was fed by KGB talking points and flattered by KGB operatives who floated the idea that he should go into the politics.

The ex-major recalled: “For the KGB, it was a charm offensive. They had collected a lot of information on his personality so they knew who he was personally. The feeling was that he was extremely vulnerable intellectually, and psychologically, and he was prone to flattery.

“This is what they exploited. They played the game as if they were immensely impressed by his personality and believed this is the guy who should be the president of the United States one day: it is people like him who could change the world. They fed him these so-called active measures soundbites and it happened. So it was a big achievement for the KGB active measures at the time.”

Soon after he returned to the US, Trump began exploring a run for the Republican nomination for president and even held a campaign rally in Portsmouth, New Hampshire. On 1 September, he took out a full-page advert in the New York Times, Washington Post and Boston Globe headlined: “There’s nothing wrong with America’s Foreign Defense Policy that a little backbone can’t cure.”

The ad offered some highly unorthodox opinions in Ronald Reagan’s cold war America, accusing ally Japan of exploiting the US and expressing scepticism about US participation in Nato. It took the form of an open letter to the American people “on why America should stop paying to defend countries that can afford to defend themselves”.

The bizarre intervention was cause for astonishment and jubilation in Russia. A few days later Shvets, who had returned home by now, was at the headquarters of the KGB’s first chief directorate in Yasenevo when he received a cable celebrating the ad as a successful “active measure” executed by a new KGB asset.

Would explain things. But who knows.

...that the GOP constantly makes me feel more and more superior to them in every single way.

In November 2018, California was hit with the worst wildfire in the state’s history. At the time, future Rep. Marjorie Taylor Greene (R-GA) wrote a bizarre Facebook post that echoed QAnon conspiracy theorists and falsely claimed that the real and hidden culprit behind the disaster was a laser from space triggered by some nefarious group of people.

She wrote a November 17, 2018, Facebook post – which is no longer available online – in which she said that she was speculating “because there are too many coincidences to ignore” regarding the fire, including that then-California Gov. Jerry Brown (D) wanted to build the high-speed rail project and “oddly there are all these people who have said they saw what looked like lasers or blue beams of light causing the fires.” She also speculated that a vice chairman at “Rothschild Inc, international investment banking firm” was somehow involved, and suggested the fire was caused by a beam from “space solar generators.”

Greene added: “If they are beaming the suns energy back to Earth, I’m sure they wouldn’t ever miss a transmitter receiving station right??!! I mean mistakes are never made when anything new is invented. What would that look like anyway? A laser beam or light beam coming down to Earth I guess. Could that cause a fire? Hmmm, I don’t know. I hope not! That wouldn’t look so good for PG&E, Rothschild Inc, Solaren or Jerry Brown who sure does seem fond of PG&E.”

I mean... am I supposed to respect her or anyone who voted for her, or the party that welcomes her and people like her?

Enrique Tarrio, the leader of the Proud Boys extremist group, has a past as an informer for federal and local law enforcement, repeatedly working undercover for investigators after he was arrested in 2012, according to a former prosecutor and a transcript of a 2014 federal court proceeding obtained by Reuters.

In the Miami hearing, a federal prosecutor, a Federal Bureau of Investigation agent and Tarrio’s own lawyer described his undercover work and said he had helped authorities prosecute more than a dozen people in various cases involving drugs, gambling and human smuggling.

Tarrio, in an interview with Reuters Tuesday, denied working undercover or cooperating in cases against others. “I don’t know any of this,” he said, when asked about the transcript. “I don’t recall any of this.”

Under hashtags like #19thpresident (which has more than 235,000 views), or #march4th (which has more than 1.4 million views) TikTok users are propagating the idea that an obscure 1871 act made the United States a corporation and not a federal government, thus rendering any laws passed after that year moot and U.S. citizens not subject to them. According to this theory, the United States will revert back to its original form on March 4th, the date when presidents were inaugurated prior to the 1933 passage of the 20th amendment. They believe Trump will be sworn in as the 19th president of the United States. (The 18th president, Ulysses S. Grant, served between 1869 and 1877, or the time period when those who cling to this theory believe the United States “became” a “corporation.”)

This conspiracy theory stems from the principles of the sovereign citizen movement, a fringe movement predicated on a slew of bizarre legal interpretations and theories aimed at “proving” that U.S. citizens are not subject to any laws passed after 1871. There has historically been some minor overlap between the sovereign citizen movement and the QAnon community, says Mike Rothschild, a QAnon expert and author of the book World’s Worst Conspiracies. ” These are people who think that through legal chicanery they can free themselves of U.S. laws and open up huge bank accounts that only they can access,” he says. “These ideas aren’t a million miles from Q, or from the affinity frauds that led up to it. It’s all about believing yourself [to be] above the law and special and ‘chosen’ in ways that normal law-abiding citizens don’t know about.” 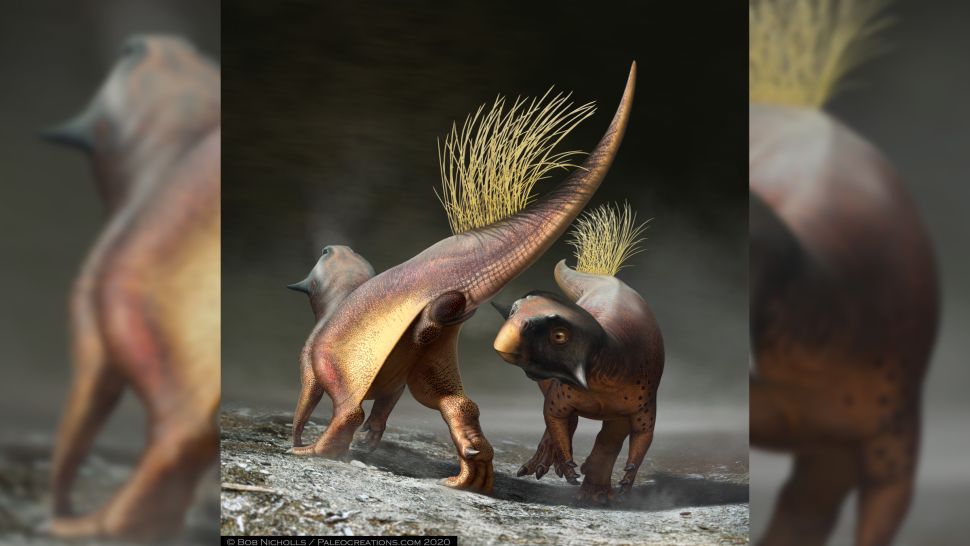 The first dinosaur butthole ever discovered is shedding light where the sun don't shine. The discovery reveals how dinosaurs used this multipurpose opening — scientifically known as a cloacal vent — for pooping, peeing, breeding and egg laying.

The dinosaur's derrière is so well preserved, researchers could see the remnants of two small bulges by its "back door," which might have housed musky scent glands that the reptile possibly used during courtship — an anatomical quirk also seen in living crocodilians, said scientists who studied the specimen.

Although this dinosaur's caboose shares some characteristics with the backsides of some living creatures, it's also a one-of-a-kind opening, the researchers found. "The anatomy is unique," study lead researcher Jakob Vinther, a paleobiologist at the University of Bristol in the United Kingdom, told Live Science. It doesn't quite look like the opening on birds, which are the closest living relatives of dinosaurs. It does look a bit like the back opening on a crocodile, he said, but it's different in some ways. "It's its own cloaca, shaped in its perfect, unique way," Vinther said.