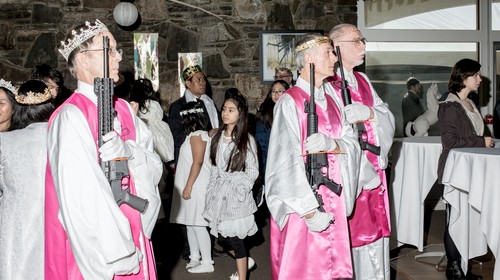 What happens when two Amendments fall in love?

A religious sect known for worshipping with AR-15s and its MAGA politics has purchased a sprawling, 40-acre compound in central Texas, which it hopes will offer a safe-haven for “patriots” from what they believe is an imminent war brought by the “deep state,” VICE News has learned.

The property, located in the small community of Thornton, 40 miles from Waco, was listed at just under $1 million. It’s been dubbed “Liberty Rock'' by its new owners, the Sanctuary Church aka Rod of Iron Ministries, led by Pastor Hyung Jin “Sean” Moon. Members of the congregation often refer to him as “King.”

While Moon’s congregation, estimated to number in the hundreds, is relatively fringe, it’s a direct descendant of the much larger Unification Church, founded by his father, Rev. Sun Myung Moon, a self-proclaimed messiah and accused cult leader whose adoring followers became known to outsiders as “Moonies.”

The younger Moon, who set up shop in 2017 in Newfoundland, Pennsylvania, follows the doctrine of his late father—with a twist. Moon says he was inspired by a biblical passage in the Book of Revelation that talked about Jesus using a “rod of iron” to protect himself and others. He concluded this was a reference to AR-15s, and integrated high-powered firearms into regular church services, including wedding ceremonies. He founded the church with the support of his brother, Kook-jin “Justin” Moon, the CEO of Kahr Arms, a gun manufacturing company headquartered nearby.