Friday, M&C gave me some terrible news: Spoon was playing in Durham on Sunday (which I did not know), and the show was already sold-out. So, I spent Friday night, Saturday and Sunday AM scouring CraigsList and eBay for anyone who had tickets for sale. No luck. By Sunday afternoon, I had given up, and started cooking a lasagna. Then, 5:30 Sunday, M of M&C called and said they weren't feeling up for it, and offered me their tickets. Hooray. And immediately after I hung up, someone on CraigsList offered me 2 tickets.

So, first up: The White Rabbits: 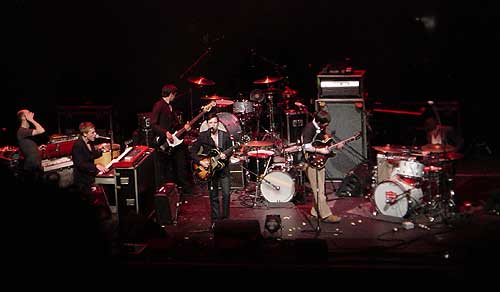 They didn't look like I expected. Their studio stuff is densely-packed, slick, and crisp - reminds me of smart 80's Brit-pop. So, I imagined a couple of guys working sequencers; I didn't think they'd be a bunch of guys wearing blazers with no shirts underneath, two (sometimes three) drummers, a keyboardist, and a couple of guitar players. Six people (three of them drumming!) can make a hell of a racket. And they did. And the sound came across sounding pretty muddy: the sound overall was too loud, the drums especially. And that isn't strictly the band's fault, of course - they do sound good on-record. I knew most of the songs they did and as best I could tell, they were doing a good job - their trademark harmonies sounded great. 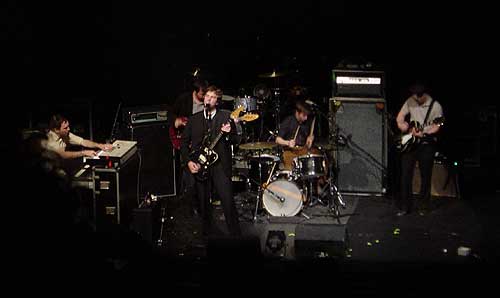 Turns out, the White Rabbits weren't wearing any shirts under their blazers because they lost too many ping-pong matches to the Walkmen the night before.

They were really good. They've got a New York garage-rock + Interpol + Pixies sound – good dynamics, interesting songs. Very nice. The sound was much kinder to them, since they didn't have as much going on as the White Rabbits. I hadn't heard them before, but I think I will give their stuff a listen. Here's a video.

The first/last time I saw Spoon, they were opening for Superchunk. I think it was the Girls Can Tell tour. There was no stage show to speak of, just the three (I think?) of them set up in front of Superchunk's gear on the small dark Cat's Cradle stage. This time, they were the headliners, and they had... 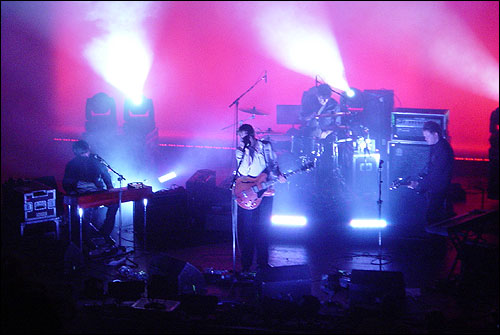 .. Lights!
They had a ton of lights. The stage was constantly filled with in smoke and candy-colored lights. Very shiny. Well, not constantly; they did turn the shiny stuff down for a couple of seconds on one song: 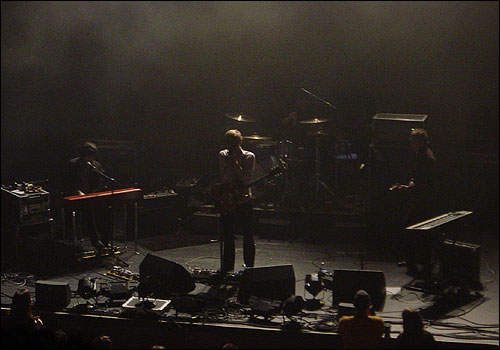 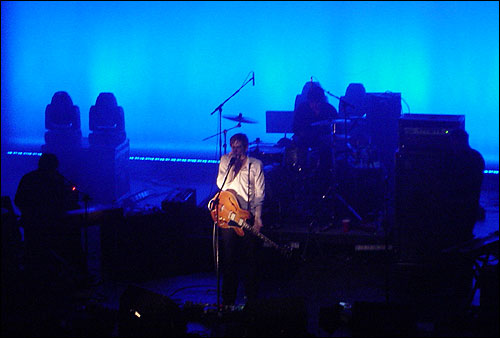 They played all, or nearly all, of their current record (Ga Ga Ga Ga Ga), a bunch of things from their previous record (Gimme Fiction), and a handful of things from their first couple of records. They also did that Paul Simon cover (Peace Like A River) that they did on the live NPR show. They didn't have any horns for "The Underdog" so that lacked a little punch; and "Don't You Evah" and "Finer Feelings" felt a little bare without all their studio polish, but mostly it was a great show. Mostly. One thing became clear when the house lights came up at the end of their last song: they didn't play a single song from Girls Can Tell. And when I post the final installment of my Favorite Records List, this Friday, you'll see why that would leave me feeling a little let down.

Still, it was Spoon, for fuck's sake, and they're my favorite band of the last 5 years. So, I can't complain too much.