Back in 1976, my dad took me on a road trip with him and his friends, from north-central PA to Lenox MA for a music festival (don't know which one). I don't remember much from the trip, since I was only 5. But I do remember bits and pieces: riding there in the VW van, sleeping in the VW van (which I recently learned was parked on the side of the MA Turnpike overnight - safe!); I remember a big crowd; I remember later thinking I was there when Doc Watson recorded his legendary live version of Black Mountain Rag (we weren't - that happened years before). So, not much - and some of that was imaginary.

Well, recently my aunt found some pictures from that show and sent them to my dad, who just sent them to me. They were pretty faded, as you'd expect from 35 year old snapshots, and I've restored them the best I could. 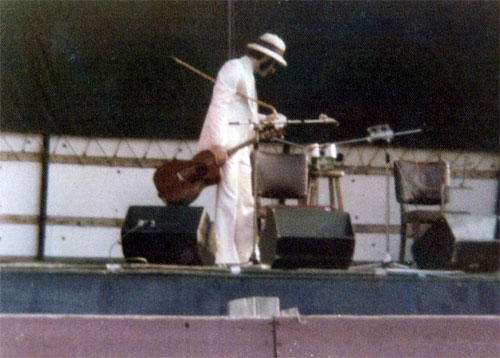 I suppose that helps explain why I like him - he was at the first concert I can ever remember attending! Since then, I've seen him twice - he puts on a good show.

Here's Doc Watson and his late son, Merle, to whom the big NC bluegrass festival, MerleFest, is dedicated: 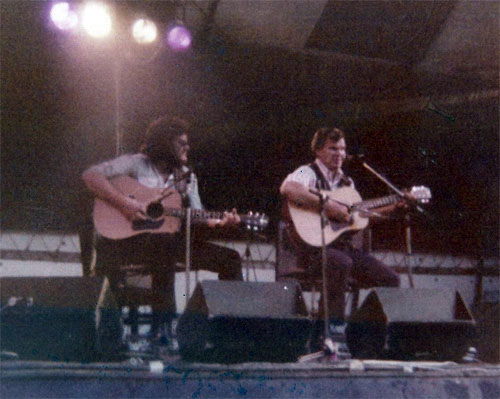 And, coolest of all, here's skinny five year old me standing next to Merle Watson while he signs someone's autograph: 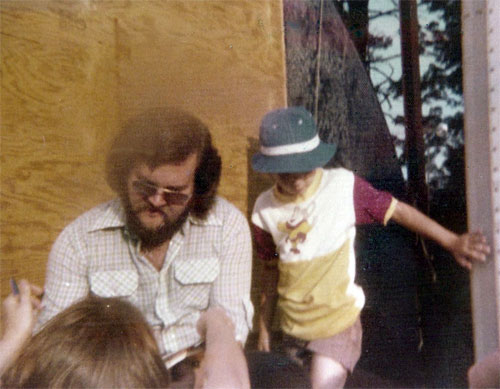 I actually do remember standing in that spot at the side of the stage, looking back at the crowd, but I could never remember what I was doing there. And now I know: I was sneaking around, annoying Merle Watson!

And for those who don't follow bluegrass: Doc Watson is a legend in the genre, and one of the finest guitar players ever - and he's blind, too! Merle was his son, and was a fine guitar player in his own right, and had been playing with his dad since at least '65. But, Merle was killed in 1985 (tractor accident). Doc started MerleFest in '88, in honor of his son, and it's grown to be a huge multi-day festival. And though 87 years old, Doc is still playing; and he often plays with Merle's son, Richard.