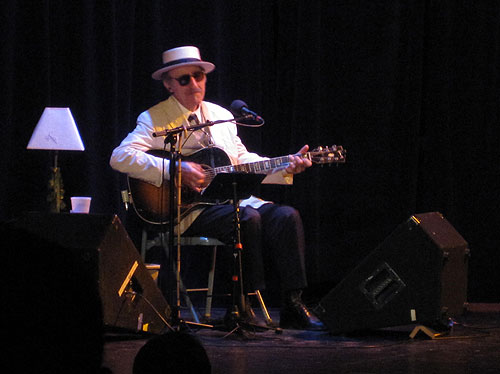 He's still at it. Still playing those songs from the 1920's and 30's. His voice is still great, he's still a fine whistler, and he still plays guitar better than I could ever hope to.

The show was pretty short, and a lot of it was spent goofing around: chatting, joking, telling and re-telling stories. I didn't count, but I'd be surprised if he played more than a dozen songs - and some of those were abbreviated. When I last saw him, six years ago, he did a much longer set.

He, and his fantastic pianist, did play "Harvest Moon", "If We Never Meet Again This Side of Heaven", "Ain't Misbehavin'", "Big Time Woman", "The Sheik of Araby" and "Marie" (all from his first two records), among others. So we got what we went there to see/hear.

It was good to see him again. I wish he would've played a bit more.

Last time I saw him, what I noticed about the crowd was the remarkable number of Hawaiian shirts. This time, it was white hair. Time marches on.