Long story short: I only run on flat roads these days, and the only flat road in my neighborhood is a paved nature/walking path. The path is unlit, so running there at night is difficult. Still it's my only option. And, with these days being short, the sun is setting near 5:00 (5:01 today, in fact), and it's hard for me to get home, get changed, and get out and back before it's too dark to see. 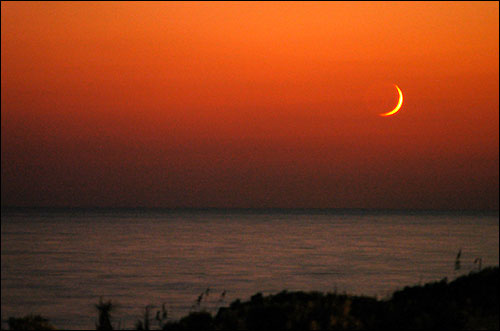 So, I looked at a sunrise/sunset chart for my area, to see how long I'll have to put up with this inconvenience of nature. And there I noticed something I don't understand.

Sunset today is 5:01 PM. And this is the earliest sunset will be, all year. Actually, it set at 5:01 on November 29 and will do so every day until December 12 - but it never gets earlier. (We'll pretend minutes are the smallest possible unit of time)

On the other hand, sunrise today was at 7:10 AM and gets progressively later until Jan 1, when it peaks at 7:25 AM (and stays there until January 13, when it starts getting earlier again).

So, the peak sunrise time happens about a month after the sunset time peaks (inversely). Which I did not expect. I'd always assumed the two of them peaked together on the solstice, then diverged again until the summer solstice when they both reached their opposite peaks. Not so.

Also, the website says that the solar noon (time when the sun reaches its highest point) reaches its earliest time in mid November - which is obviously out of sync with both sunset and sunrise times and the solstice.

6 thoughts on “Calling All Astronomers”