First, whip out the jigsaw and cut a pair of feet from a piece of oak. 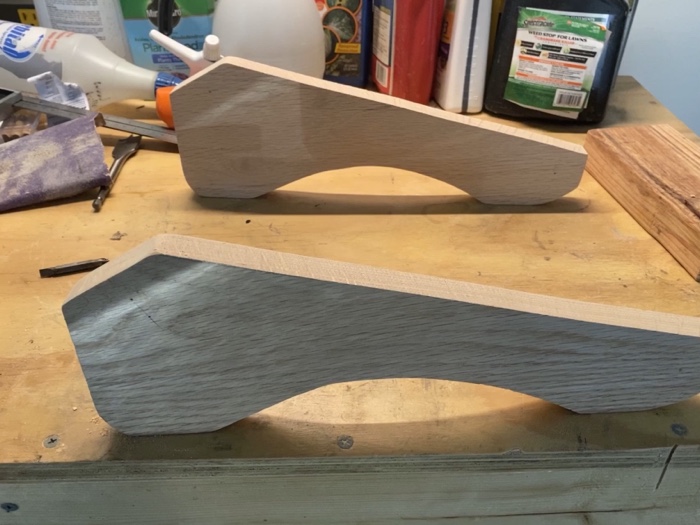 Then cut some sticks, drill some holes for pegs to connect everything. 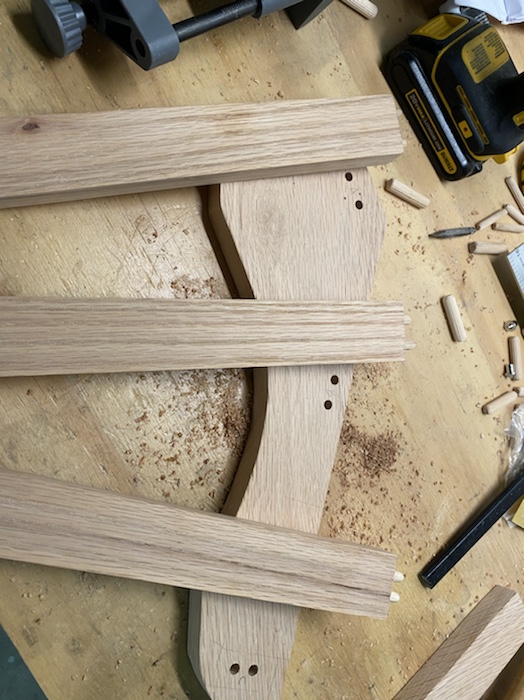 Then build a back section, and bang it all together to make sure everything fits. 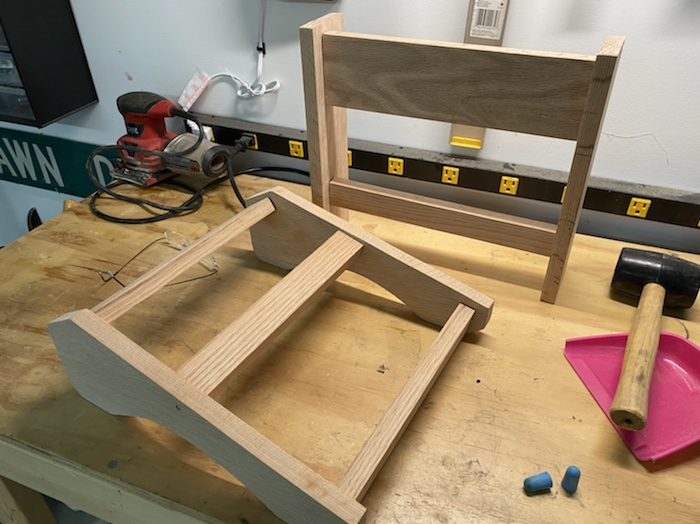 Stain it all dark walnut. 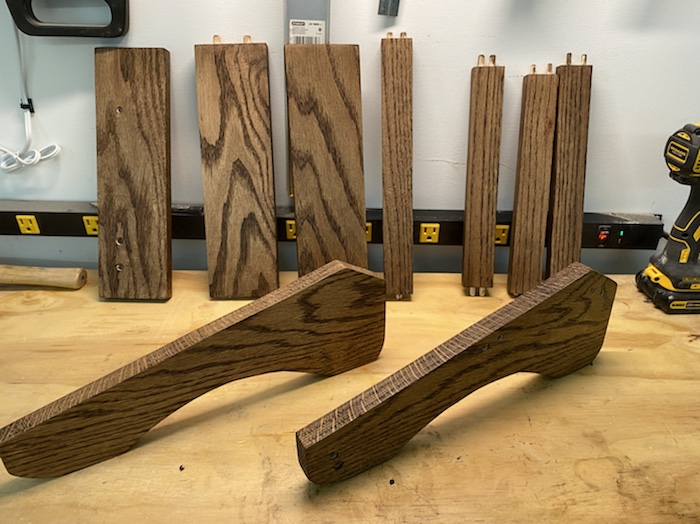 Glue the pieces together. 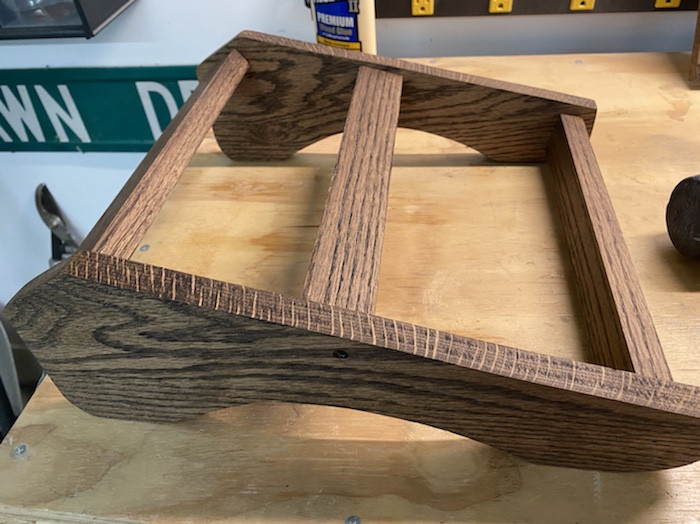 Attach the back with some black carriage bolts. Six of them, because four wouldn’t look serious enough. Maybe there are some gaps that could use a little putty. 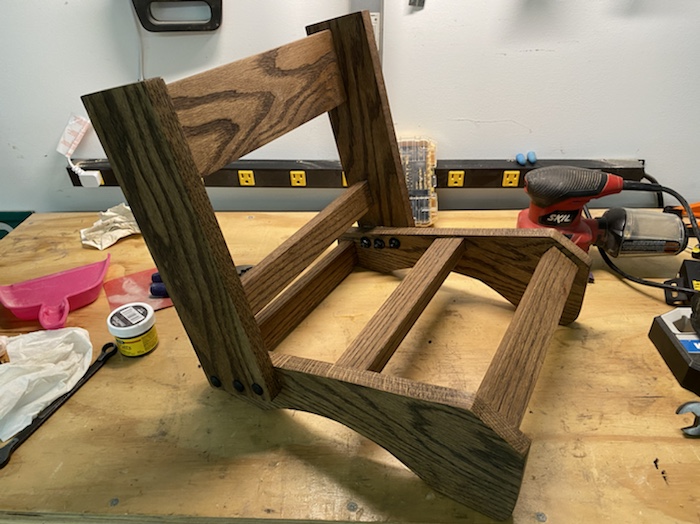 Give it a few coats of varnish (the application of which will take off a lot of stain that was just sitting on the surface). Add some nonslip strips. 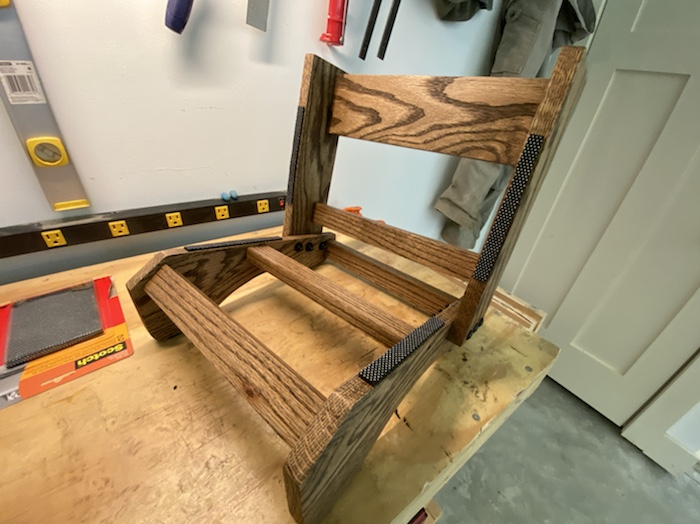 Accept the mistakes and should-have-dones.

And, there you have it. 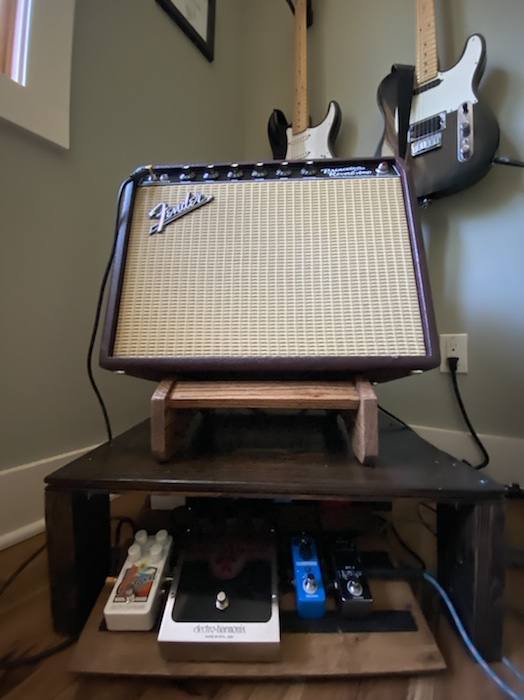 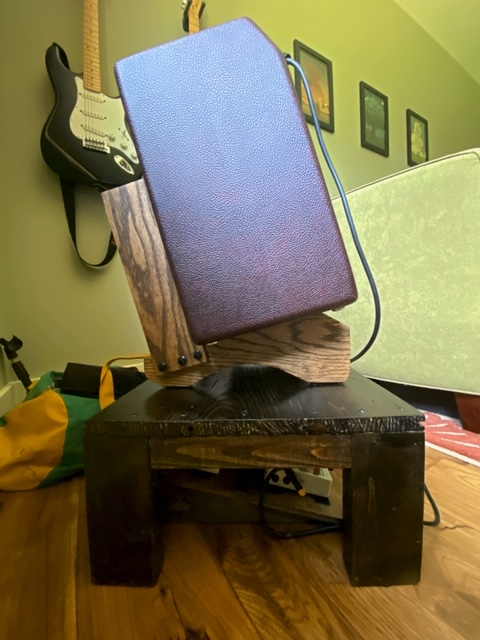 A DIY version of this guitar amplifier stand to replace this. And it will sit on the scrap wood table that I made last week, which itself makes a nice hiding spot for this.

I spent maybe $35 in wood and $5 for the carriage bolts. But I also spent a lot on tools. This was my first attempt at doing dowel joinery, and I had to buy a dowel jig, and some better drill bits, etc.. It will be a long time before I try dowel joints again. It’s a PITA with just hand tools.

I’m not sure if it has an official name. But until someone tells me otherwise, I’m calling it a descending sixth.

I stumbled onto this progression a long time ago.

It’s basically in C major – even though the C7 and the C9 aren’t actually in C major. But it’s the F-major to F-minor change that’s always grabbed me. That’s a strange pair of chords to see next to each other. The F is certainly in C, but that Fm isn’t. And to have Fm next to an Fmaj is very odd. But works, in that context.

And, if you want to clear away all the brush and get rid of those fancy chords, you can shorten it to C, F, Fm, C and still get the effect.

So that trick stuck around in the back of my head for a few years. But recently I was fiddling around and came up with this thing:

All those 7th’s make things all mellow and smooth. But the A# in that Em7♭5 strictly speaking is out of place – it’s not in the D major scale. But it works, in the progression.

Then I thought. And having thought, I discovered. Firstly, even though the progressions are very different, the trick to making those out-of-key chords work is the same in both cases.

Note that the chords where this trick happens are very similar. F and Fm, from the first progression, are almost identical chords; there’s only a single half-step difference in one note – the major third becomes a minor third. Likewise, Em7 and Em7b5 in the second example are the same chord but for a single half-step change in one note – the fifth becomes a flat-fifth. One note drops a half step. That’s the first part of the trick. And the second part of the trick is that when the next chord, the tonic chord, shows up, the note that had dropped a half-step in the previous two chords drops another half-step to become the fifth of the tonic.

So, even though that note was doing different things in the F/Fm and Em7/Em7♭5 (major/minor third vs. 5/♭5) chords, in both cases, that note is also the 6th of the tonic descending to 5th over three chords.

And, our ears are happy to allow that ‘wrong’ note stop by, as long as it’s moving in the right direction.

And, while I was typing this, I remembered one particularly neat example of the trick from Big Star’s “Way Out West”: the intro (and closing) lick is D, Dm, A. Same descending 6th.

And Brandi Carlile does the major-minor-tonic trick in the third and fourth lines of the verses in “Follow”:

I’m sure this is the kind of thing they teach in first year music courses. But, I’m learning the old fashioned way: messing around while waiting for web pages to load. Anyway, I thought it was neat.

One of my projects this past week was to build a pedalboard to corral all of my various effects pedals. They’ve been sitting in a bag for years because wrangling them, with all the cables and the always-dead 9V batteries, was just too much work.

But if I could get them all arranged in a nice compact group with short cable and dedicated external power supplies, I might be tempted to use them once in a while.

My first idea was to take an old bamboo cutting board from the kitchen, add some feet and cut some holes in it to snake cords through. But, it was just a bit too small to hold all my junk. So, I had to get a bit more creative.

It took me four days, but I did manage to build one that would have worked, but was just simply terrible. It was all misshapen and obviously hacked-together, because I rushed and didn’t plan or measure or cut or assemble carefully. It sucked. And because the design was so simple to begin with, I couldn’t stand looking at such a fucked-up failure. I threw it away and started over.

After laying out all the pedals, in the right order, I figured out I needed two rows of at least 17 inches each. So, I planned on a 18″ wide board. We have a bunch of leftover flooring planks in the attic – already finished on top, stiff as can be and very light. They’re ‘engineered’ wood – 1/8″ of the top layer on a stiff plywood base. The planks are 7″ wide, and so are just big enough to accommodate the two big pedals in my collection.

First, a frame. This is made from pine 1x4s – just a couple of simple triangles joined by two straight boards. The hardest part of the whole thing was cutting the hypotenuses of those triangles – that took a backsaw and lots of patience. Then I trimmed the tips off the triangles. Sanded a bit and then stained with the only stain I had on hand : ebony. Rustic. Glued, then screwed it all together. Couple of light coats of polyurethane for added spiffyness. 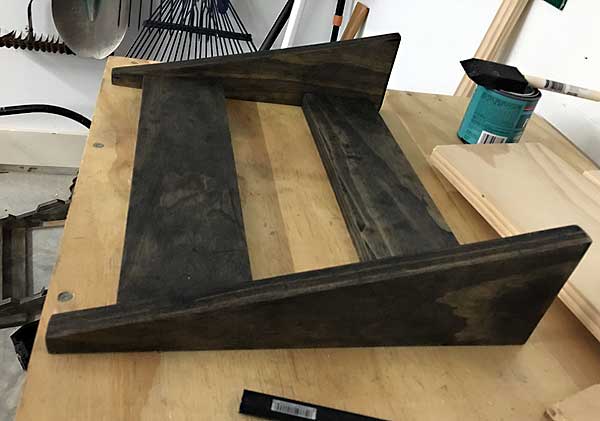 (The frame is actually upside down in that pic)

Then I glued and screwed the top planks onto the frame. 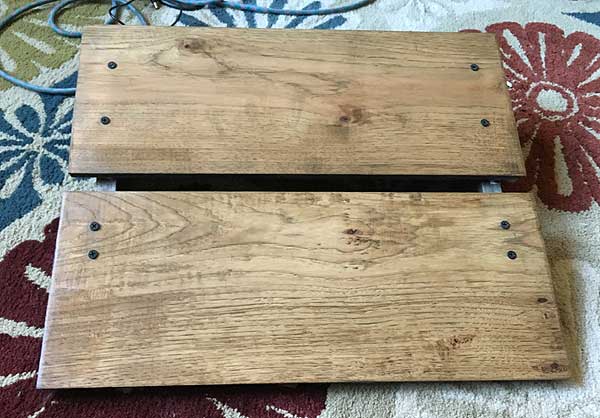 The gap between the planks is there to run cords and cables underneath.

Needed to put the screws near the top of the plank on bottom level, because the screws I used are so long. 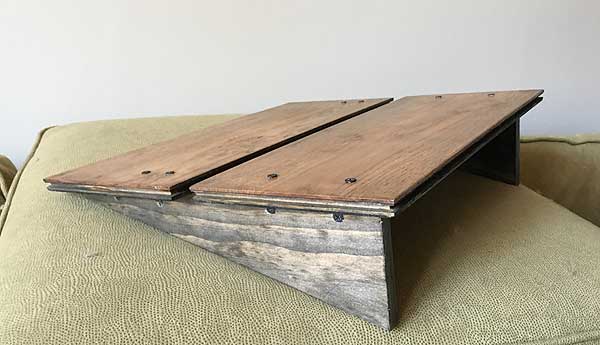 The ebony stain worked out well enough with the color of the floor boards, I think. And the sexy black drywall screws really bring it all together, right? “Not completely hideous” is a win, in my book.

Four runs of super-strength velcro across the top boards, and matching velcro on the bottom of each pedal. 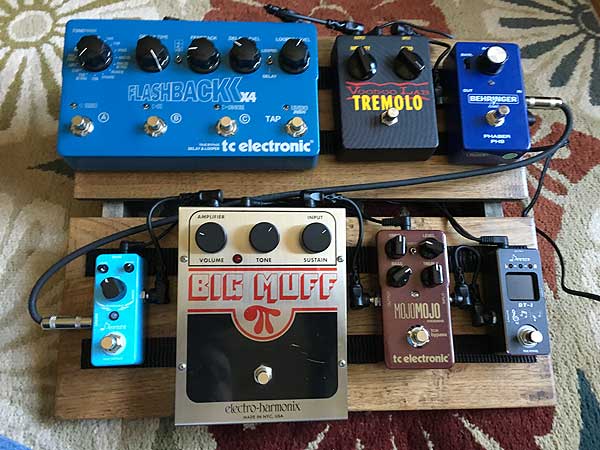 And there it is, with all the cables and power supply cords. I put some soft rubber pads on the bottom, to keep it from sliding around. I’m going to get some cable tie action underneath to tidy-up the power cords. And, I need to get a cable with right-angle connectors to handle that run from the chorus in the bottom-left up to the phaser top-right. The cord that’s doing it now looks untidy.

Sure, it looks like it was made from scraps – which it was – but, it’s completely functional! 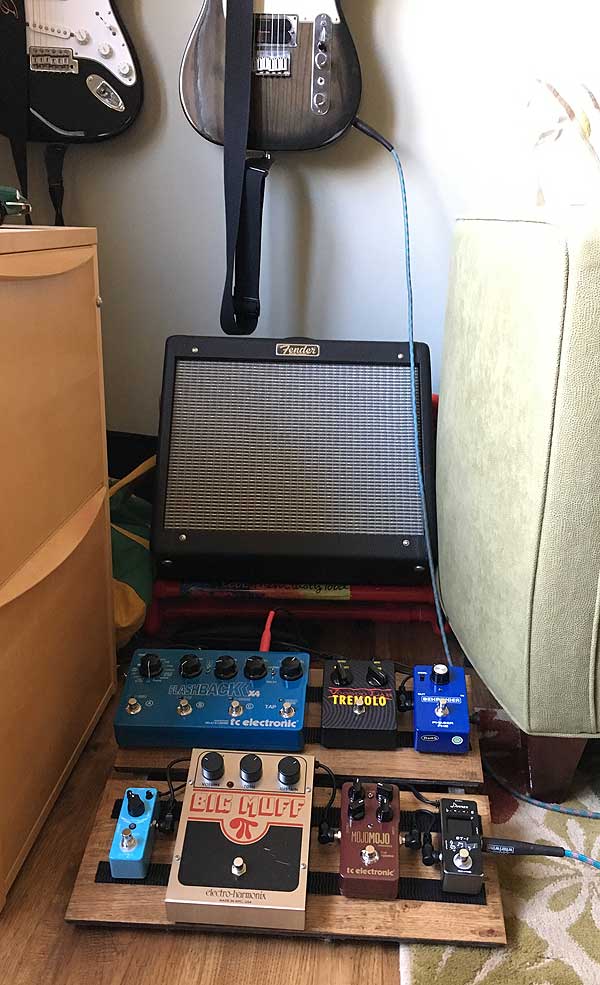 And it fits perfectly in the little nook where all my other rockstar crap lives.

All dressed up and nowhere to go.