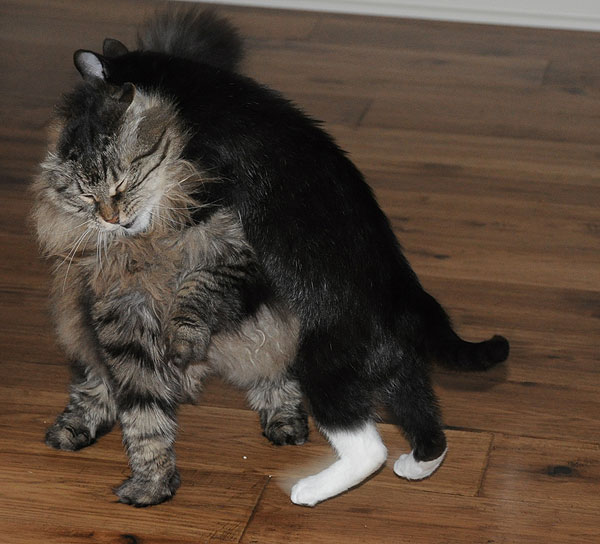 Here, Pete gives Pepper a bite in her neck. I’m pretty sure he’s just playing, but he’s strong and fast and agile and hasn’t learned to play nicely. Pepper is a big lumbering hulk who really just wants to be loved. So, she’s getting the worst of it.

He’s bolder and more aggressive now, and she’s less and less tolerant of him. Friday night, he attacked her and she got howling mad at him. Someone peed on the floor. Then she chased him under the coffee table and trapped him there, growling at him, for 30 minutes. He spent the night locked in the bathroom.

He learned how to get the lid off the big metal bucket in which we store the dry cat food. We came home and the lid was on the floor and he was fat and bloated and happy. That was the only time we’ve ever seen him fail to eat all the food he could find. He’s almost managed to get it off a couple of times since. Now we keep it kept behind closed doors.