It never ends, does it? Guitar players are never satisfied with their stuff. 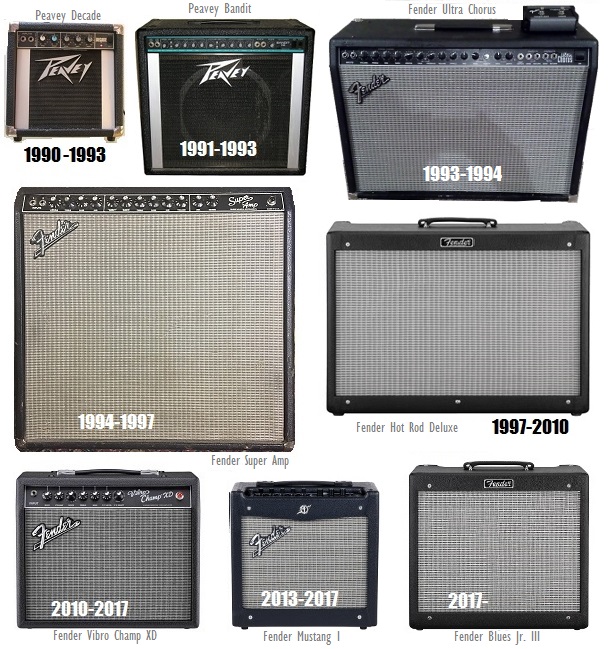 Seven years ago I traded-in my Fender Hot Rod Deluxe amp because it was much too big and loud for a bedroom amp. After that I get a Fender Vibro Champ XD, which I loved for along time. But eventually I started to hate the sound of it. I wanted that glassy Fender clean sound, and that amp couldn’t get there. At one time, I swear it could, but it couldn’t do it any more.

When the Champ broke down I bought a Fender Mustang I amp: an all-digital amp with a baffling number of options and a terrible interface with which to set them. That was fun for a couple of months. But once I got the Vibro Champ working again, the Mustang was repurposed as a step for the cats to use to climb up on my desk.

So, yesterday I threw them both in the back seat and went on a guitar store odyssey. I spent four hours driving around the area, visiting every guitar store my phone could find. I looked at dozens of amps. The Vox AC15 has that beautiful cranked Vox sound (think end of We Will Rock You), but I didn’t really like the clean sound and I’m not a fan of their styling. Orange makes some cool looking amps but they are more geared to loud screaming overdrive and that’s not my thing right now. I almost pulled the trigger on a used tweed Fender Pro Jr, but the lack of reverb and the minimal controls (two knobs: volume & tone) worked against it. The Fender Bassbreakers are interesting, but not quite right. Saw a Vox Brian May edition AC30 (only 500 made!), which I didn’t bother trying since it has only one knob: Volume.

I ended up buying a Fender Blues Jr.. It’s actually the little brother of the Hot Rod Deluxe I used to have, but with 15 watts instead of 40 and fewer bells and whistles. It’s similar to the Pro Jr, but has reverb, low/mid/high tone controls, a pre-amp stage, etc. – much more flexible. It can get loud and keeping it in bedroom volume is a bit tricky, but it also sounds so so so good. The jump from the 8″ speakers of the Champ and the Mustang to the 12″ speaker of the Blues Jr is huge – more than 2x the volume of air gets pushed by a 12″ speaker vs an 8″ ! So the sound is much much fuller and ’rounder’. Glorious. And yet, the amp is only an inch or two bigger than the others. Fits perfectly on the bright red amp stand I made for the Champ.

A Guitar Center on a Saturday afternoon in December is unbearable.