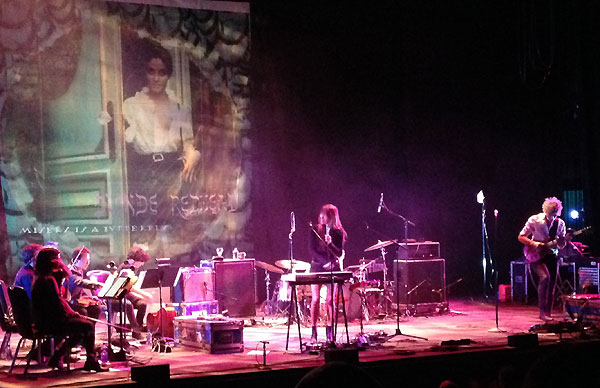 Saw an old favorite, Blonde Redhead, at Duke this past weekend. I love their first three records, which are all pretty and noisy like a more-melodic Sonic Youth. On those early records, they were fairly minimalist: guitars, bass, drums, with vocals shared by the Japanese Kazu Makino and Italian Amedeo Pace. They sing in English, but their accents and distinctive (non-native?) phrasing give the songs an other-worldly vibe.

On this current tour, they’re playing their sixth record, Misery Is a Butterfly, start to finish. It’s a much mellower record than those early ones; songs are all slow, minor key, dream-like. And it’s much more lushly produced; instead of drums and angry dissonant guitars, there are strings and keyboards and drum machines. And so, to make this work live, they’re touring with a string quintet (ACME). It worked really well. Sounded great.

So, I’m glad I finally got to see them. But I wish I hadn’t skipped seeing them a decade ago.