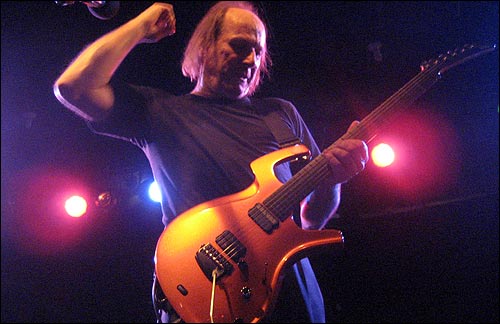 Saw the legendary Adrian Belew at the Cat’s Cradle last night. Wow. Amazing. I’d only seen him live playing acoustic, until last night, so I had no idea how loud and ferocious he was when plugged-in. Yow. I was directly in front of him, enjoying the full shreiking joy of his 4 amps. The ear plugs went in about 2/3s through.

He had a drummer, Eric Slick, and bass player, Julie Slick, with him. They were absolutely amazing. Eric Slick is probably the best drummer I’ve seen live, and he’s only recently turned 20. Simply overflowing with apparently effortless power and precision. Julie Slick, his 21-year-old sister, is a monster bass player; she stands there, baby-faced and barefoot in her blue dress, happily playing parts written by bass giants like Les Claypool and Tony Levin – even duplicating, on her bass, much of Levin’s Stick work on Crimson’s “Elephant Talk”. You’d expect them to be good, to play with someone like Belew (who’s pushing 60), but they were gooood – I’ll be surprised if they don’t end up huge, someday.

They did a lot of long, crazy instrumentals that ended up with the three of them breaking off into different rhythms: very free, but engaging, and never sloppy – when the drummer hit that snare, they were always right back where they needed to be. They did a bunch of new stuff from Sides 1,2&3, a handful of Belew classics (Big Electric Cat, Young Lions, Paint The Road, etc), and a bunch of King Crimson songs at the end (Three Of A Perfect Pair, Thela Hun Ginjeet, Frame By Frame, Elephant Talk). All were great. The guy next to me, who said he’s seen Belew “30 or 40 times”, says Belew’s next record, “Side 4”, will be a live recording from this tour – yay! While I like Belew’s studio records just fine, the songs were simply amazing when played by this band. Should be great.

Not knowing what to expect from his live electric show, I was half-expecting him to do a bunch of tame versions of his serious, message-heavy songs (Men In Helicopters, Peace On Earth, Lone Rhinoceros, etc) with some guilt-inducing commentary between songs – a VH1 Storytellers kind of thing. But it was nothing like that at all – no messages, no acoustic guitars, and none of his Beatle-esque songs (all of which I like, b.t.w.). Except for a solo atmospheric instrumental piece Belew did in the middle, it was all heavy aggressive screaming progressive rawk. And it was all surprisingly modern – even the old stuff sounded fresh and new; except for the fact that the crowd was chock-full of balding pot-bellied Boomers, you wouldn’t think this stuff was coming from a guy whose best-known work was done in the mid 80s. As far as I can tell, there’s no good reason this particular band he’s put together shouldn’t be a giant in the current alt-rock scene.

The only part that sucked was the Tuesday night part – I’m totally whipped this AM.