Some guy named Matt Miller has a column at the Washington Post. In today’s installment, apparently longing for the days of Ross Perot, he expresses his wish that a benevolent billionaire will enter the Presidential race, unencumbered by any kind of ideological or party loyalty, and magically make our troubles go away, as only a man so wealthy that he’s lost the desire for anything but good works can do.

So if the choice for a high-net-worth patriot is to (a) devote him or herself to a foundation, or (b) run for president or invest in related efforts, there’s no question that the presidential campaign is the path to greater impact.
That’s because there is simply no better vehicle for advocacy than a presidential campaign. It’s the moment every four years when the press and public are attuned to a broad discussion of the nation’s future. And with our two parties poised to run grossly misleading campaigns next year in their drive to win 50 percent plus one, the opportunity to break through with real answers and straight talk is enormous.

A high-net-worth patriot is gonna give us real answers! Straight talk!

Big Daddy Moneybags MD is gonna tell step up to the podium, wag his gold-encrusted finger and us all what’s what. He’ll make us take our strong, cleansing, righteousness-making medicine: the medicine we need because cause we’ve been bad bad bad! And a firm, stern, billionaire patriot is just the kind of physician to administer it! 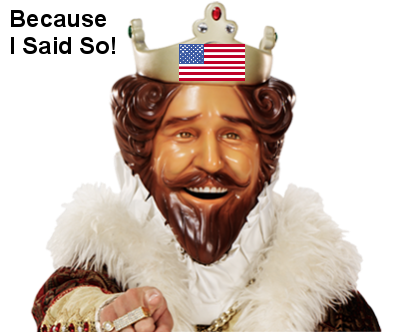 Blech. Again with the delusion that a President can, through sheer force of will, do whatever he wants. He’ll just stamp his foot and the tough choices will implement themselves. Congress? Presumably, they’ll just fall in line, patriotically. Just like they always do when a President demands that they do.

Is there some US Civics textbook out there that say a President has such power? If not, I’m at a loss as to why so many otherwise-intelligent-seeming people would believe such pernicious nonsense.

10 thoughts on “Dr Moneybags Will See You Now”