What can one infected person do in one night of bar hopping in Seoul?

Health authorities have been on alert after a 29-year-old tested positive after visiting five clubs and bars in Itaewon on May 1-2, in the first local infection reported in a few days.

The case quickly swelled into an infection cluster, affecting not only the 73 who had been in Itaewon but also 29 who were infected through secondary transmission. No tertiary transmission has been reported yet.

One person may have given it to 102 other people, in one night.

We’re all getting it. Make sure your affairs are in order..

As the Defense Department negotiates its way through the coronavirus pandemic and its fallout, military entrance processing stations are working with new guidance when it comes to bringing COVID-19 survivors into the services.

A past COVID-19 diagnosis is a no-go for processing, according to a recently released MEPCOM memo circulating on Twitter.

“During the medical history interview or examination, a history of COVID-19, confirmed by either a laboratory test or a clinician diagnosis, is permanently disqualifying …” the memo reads.

Does the military know something we don’t?

Kevin Drum’s lament is where I’m at.

These are bleak times. In the middle of a historic pandemic we are about to give up the fight and commit collective suicide because we are ruled by a mad king. Everyone is out to get me, he broods late at night, fingers flashing over his smartphone. Nobody appreciates what I’ve done for them. The press hates me. The pandemic is a Democratic plot to turn people against me. A cure is just around the corner. They’re exaggerating the death rate to make me look bad. We don’t need more testing. What happened to my beautiful economy? Where are my rallies?

And while the mad king raves, his courtiers shuffle around not knowing what to do. Some enthusiastically support him. Some mutter to the press. Some try to ignore the madness around them and keep working.

And the rest of us sit around feeling helpless. We are on the cusp of needlessly killing tens of thousands because the mad king deems it so, and there’s nothing we can do about it. At times we begin to wonder if we’re the ones who are mad. Maybe we have beaten the pandemic. Maybe the death toll will keep going down. Maybe we really did overdo the whole social distancing thing.

No. We haven’t beaten the pandemic and we know it. But the mad king says we have, and his followers roar their approval. We are headed deep into the darkness, and we’re not doing it because we lost a battle that we fought to the last man. We’re doing it because we’re in thrall to a mad king who no longer belongs to the same world the rest of us live in and tells us that we are all honored warriors for dying in his cause.

Thanks, GOP. You’re the best.

RALEIGH, N.C. (WNCN) – A leader of the ReOpen NC group revealed in a Facebook post that she tested positive for COVID-19.

Audrey Whitlock posted to the ReOpen NC Facebook page early Sunday saying her two-week quarantine was ending. She described herself as an “an asymptomatic COVID19 positive patient.”

“The reality is that modern society has not been able to eradicate contagious viruses. A typical public health quarantine would occur in a medical facility. I have been told not to participate in public or private accommodations as requested by the government, and therefore denied my 1st amendment right of freedom of religion,” Whitlock wrote.

She went on to say: “It has been insinuated by others that if I go out, I could be arrested for denying a quarantine order.”

If she was quarantined in a medical facility vs at home, the impact on her ‘freedom of religion’ would be different because… ?

Also, why did she get tested if she was asymptomatic ?

Testing people may not be the best way to see how much coronavirus is in a community. Testing sewers may be better.

New Castle County, Delaware is analyzing its sewers in a high-tech way to track the amount of coronavirus in the county.

An analysis made by BioBot, a startup connected to MIT, estimates more than 15,000 COVID-19 infections as of April 15, 10 times what conventional tests confirmed.

BioBot looks for traces of the virus in wastewater.

The company was founded by female scientists at MIT.

“You can get tests from different substations. You can then say, ‘OK, these are where our top three hotspots are, and we should focus our testing there,'” he adds.

After 6 and a half weeks of searching, I found TP!

Sure, I was there at 7:30AM, after first striking out at three other stores. But, success!

From Bryan Regan, on FB (plenty more pics of plenty more crazies at the link): 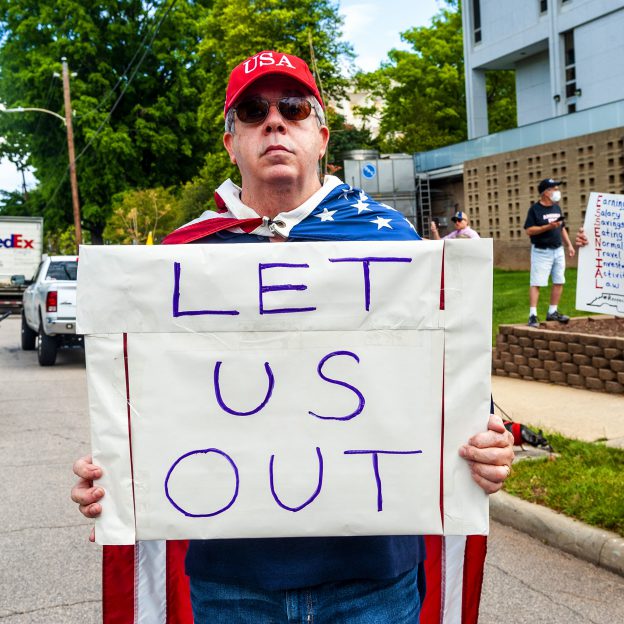 Where exactly do you think you are … ?

Dipshits marching around the NC capitol, complaining about tyranny and 5G and their rights.

If any of their delusions about tyranny were right, they’d all be dead or in jail by now. Taking the kids out for a stroll around the downtown and a gorgeous spring day, complaining about the hoax and the tyranny that keeps them locked up while wearing facemasks, kindof sends mixed messages.

Pneumonia is an infection of the lungs in which the air sacs fill with fluid or pus. Normally, patients develop chest discomfort, pain with breathing and other breathing problems. But when Covid pneumonia first strikes, patients don’t feel short of breath, even as their oxygen levels fall. And by the time they do, they have alarmingly low oxygen levels and moderate-to-severe pneumonia (as seen on chest X-rays). Normal oxygen saturation for most persons at sea level is 94 percent to 100 percent; Covid pneumonia patients I saw had oxygen saturations as low as 50 percent.

To my amazement, most patients I saw said they had been sick for a week or so with fever, cough, upset stomach and fatigue, but they only became short of breath the day they came to the hospital. Their pneumonia had clearly been going on for days, but by the time they felt they had to go to the hospital, they were often already in critical condition.

There is a way we could identify more patients who have Covid pneumonia sooner and treat them more effectively — and it would not require waiting for a coronavirus test at a hospital or doctor’s office. It requires detecting silent hypoxia early through a common medical device that can be purchased without a prescription at most pharmacies: a pulse oximeter.

Why yes, I did just order one from Amazon!

… of the Soft Boys – another COVID19 victim.

I’m writing this as Matthew Seligman slips out of this life and into wherever souls go next. Everybody goes, but none of us were expecting Matthew to leave us so abruptly, forever. It is strange and very sad to be talking of him in the past tense. I first met Matthew in 1976 in Cambridge, just before the beginning of the Soft Boys. He had nice dark hair and was very charming, with a slight break in his voice. A joyous and funky bass player, he made Underwater Moonlight an exuberant LP to record and listen to. His manic bass run at the end of “Insanely Jealous” and his stately propeller dive into the last chorus of the title track, as well as the insistent groove he brought to “Kingdom of Love” are some of the finest bass playing I have ever witnessed.
Matthew truly believed in the Soft Boys and the record. It was early 1980 and the second Cold War was intensifying. I fondly remember stomping over to the pub after a session and him saying through the dismal spring wind, “We may all be about to be blown up, but at least we’ll have made a classic album.”
The band didn’t survive too long into the bleak 1980s, but Matthew found a home as a bass player in many great musical shells. The Thompson Twins, David Bowie, Morrissey and Chrissie Hynde were all lucky beneficiaries of his intuitive and circular grooves.
As well as bass playing, he specialized in one-liners. “Pop music is about over-stating the obvious” and “What you’ve proved to the music industry is that you can’t sell records” are two of my favourites.
I’m profoundly grateful to have played music with him – you could really see his face light up like a full moon when he listened back to a take he enjoyed. Onstage he would lope and lurch and pace when the music moved him. Matthew is, was, and always will be one of the greats. My heart goes out to his partner, Mami; his children Daisy and Lily, and all who were close to him and his lunar intensity.
Robyn H, Nashville, April 17 2020

A month of sickness songs. There are enough out there that I probably could do another one. I won’t.

Damn, this sitting at home is getting to be a drag.