So, David: What the hell happened with the polls this year?

So the basic story is that, particularly after Covid-19, Democrats got extremely excited and had very high rates of engagement. They were donating at higher rates, etc., and this translated to them also taking surveys, because they were locked at home and didn’t have anything else to do. There’s some pretty clear evidence that that’s nearly all of it: It was partisan non-response. Democrats just started taking a bunch of surveys [when they were called by pollsters, while Republicans did not].

Just to put some numbers on that, if you look at the early vote results and compare it with the crosstabs of what public polls said early voters were going to be, it’s pretty clear that early voters were considerably less Democratic than people thought. Campaign pollsters can actually join survey takers to voter files, and starting in March, the percentage of our survey takers who were, say, ActBlue donors skyrocketed. The average social trust of respondents went up, core attitudes changed — basically, liberals just started taking surveys at really high rates. That’s what happened.

What separates the winners from the losers is how a person reacts to each new twist of fate.

Next time, can we stop it with treating opinion polls like gospel?

BEDFORD, N.H. — A “non-masked voting” tent in New Hampshire collapsed around midday Tuesday, sending a 72-year-old poll worker to the hospital and forcing election officials to find another option for voters who preferred to cast ballots while not wearing a mask.

One poll worker suffered a laceration to his face; Klein had to find a way to move “non-masked” voters into a room inside the school, safely separated from voters wearing masks to protect themselves and others from the possible spread of the coronavirus. 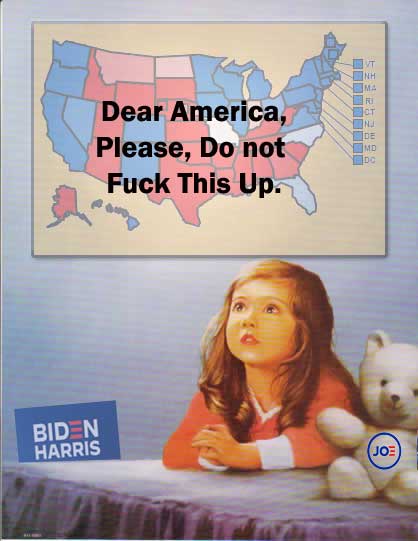 Chicken-counting season is upon us! 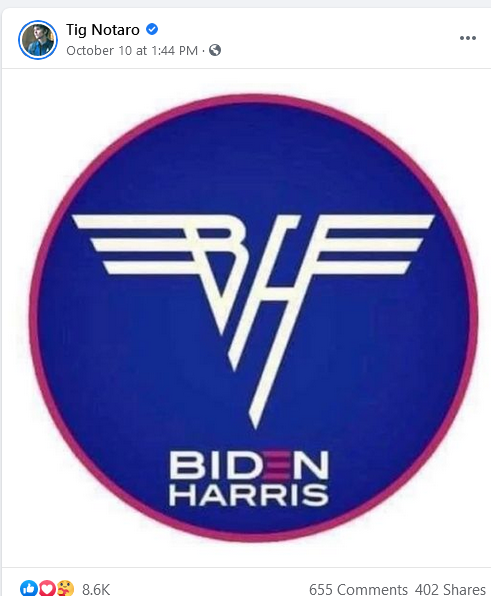 We watched about 30 minutes of the VP debate last night. Seemed like a pretty traditional debate, therefore boring. But what got us to turn it off was when the local Fox channel we were watching it on (they were the first channel we found that was carrying it) cut into the debate with about ten seconds of a ludicrous anti-Biden smear ad.

We’re discussing the legacy and persistence of racism more now than in decades. And Trump understands that all this talk about institutional racism and White privilege makes many White people feel attacked and defensive, as though they’re being personally accused of sins they feel they haven’t committed.

So in response he gives them permission to stop feeling bad. Not only will I protect Confederate statues and banish talk of racism from schools, he claims, I’ll convince everyone that the real thing we need to eradicate isn’t racism itself but talking about racism.

Call it the White Innocence Project.

This is the message Trump wants those supporters to hear: We’re done talking about slavery and racism. You don’t have to do any soul-searching, you don’t have to question how American institutions operate, and you sure as hell don’t have to feel guilty about anything. You, beleaguered White man, are the best there is, because you are America, not them.

So what’s the problem? We know that the vast majority of Republicans don’t really care about the budget deficit, so it can’t be that. Relieving the financial stress on millions of voters would surely be good for Donald Trump, so partisan politics can’t be the answer. Everyone in Congress represents a state that desperately needs help, so it can’t be a geographic thing.

And yet Republicans refuse to support a serious stimulus/rescue plan. I really, truly don’t understand. Is it just habit? Automatic opposition to anything Democrats like? What on earth is the problem?

They’re going to use Dems’ refusal to vote for the stimulus bill in campaign ads.

They’re not going to say “Senator Foo wouldn’t vote for COVID19 stimulus relief because he thought it was too skimpy.” They’re just going to say the first part.