They took a dump on the seat of American democracy — literally.

Some of the unhinged pro-Trump rioters who stormed the U.S. Capitol on Wednesday defecated inside the historic building and “tracked” their feces in several hallways, the Daily News has learned.

A source close to Sen. Chuck Schumer said staffers to the New York Democrat found out about the fecal fiasco on Thursday.

The vile attackers, whose violent invasion of the Capitol left five people dead, apparently went No. 2 in a bathroom and then smeared their extremist excrement around the building, leaving behind brownish “foot-prints,” the source said.

“It looked like they tracked it around,” said the person.

In the pictures of the insurrectionists storming the US Capitol today, you'll probably see a man dressed like Braveheart or a Viking. 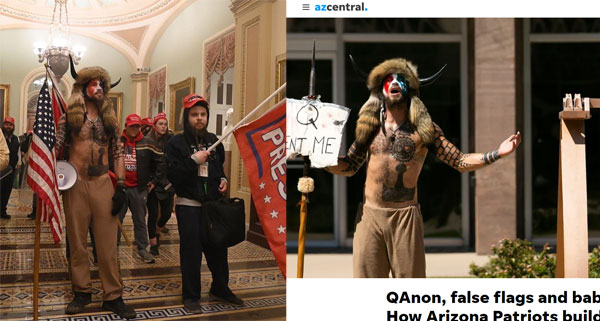 On the left, he's in the Capitol. On the right, he's at the top of an AZ Central article from October about how QAnon and conspiracies have taken over the GOP.

Keep that in mind, when you inevitably hearing Trump cultists claiming the people in the Capitol were antifa and BLM (as you will).

I recommend that Congresspeople not start any sentence, in any situation or context, private or public (and especially not while shouting out to a rally of armed lunatics), with the phrase "Hilter was right".

Not a great look for a freshmen Congresswoman to be caught on tape at a rally in the Nation’s Capitol saying “Hitler was right.” @Miller_Congress

And for those who want to nitpick what she said, let me just stop you right there—Hitler was right on literally nothing. pic.twitter.com/KXbVT8jTr3

At the very least, nobody is going to pay much attention to what follows - you just bigfooted your own point. But you also sound like a too-clever jackass.

I'm sure the these things are totally unrelated.

so much depends
upon

the integrity of
SCOTUS

amidst the cries of white
chickens

"I think he's probably right. I am the most fabulous whiner. I do whine because I want to win. And I'm not happy if I'm not winning. And I am a whiner. And I'm a whiner and I keep whining and whining until I win," he said. "And I'm going to win for the country and I'm going to make our country great again."

Why? Because prosecuting the previous administration is not what America does. There's no legal reason we don't; we just don't do it. It's one of the norms Trump and McConnell didn't destroy, despite the fact that Trump dangled it in front his audiences every chance he got (Lock Her Up!) - remember, the GOP base truly thinks Obama and Clinton were literal criminals. And they wanted Trump to reach back and prosecute everyone. Yeah, well imagine the state of the country now if they had done it.

But Trump actually did illegal things! OK, here's the tough part: most of America simply doesn't care. They want the government to make their lives better and to stay out of their lives - and they don't care if that's a contradiction, because that's how much thought they put into the whole thing. STFU and make my life better, now. Spending time going after Trump is not going to look like it's making anyone's life better. It will look like government wasting time and energy and it will look like political theater and people will not like it. The laws Trump broke didn't affect most people directly, and so they aren't clamoring for redress.

Yes, everyone who is demanding that there needs to be a grand cleansing and hammering and scouring is going to be sorely disappointed. But Biden is not an avenging angel. Neither was Clinton, nor Obama. Turns out Trump wasn't either. That's not what Presidents do.

The Dems took their shot at Trump and the GOP Senate blocked it. So we had to vote him out, and we did. And then we got to watch him flailing and trying to spin his loss into a victory. But that's as much satisfaction as we're going to get. Enjoy it.

Check back in four years and see if I was right!

A lot of people like to say the US should be split into Red America and Blue America. And they usually mean Blue = the north-east plus the west coast.

What would it look like if you split the US in two contiguous areas, forming borders from existing county borders? 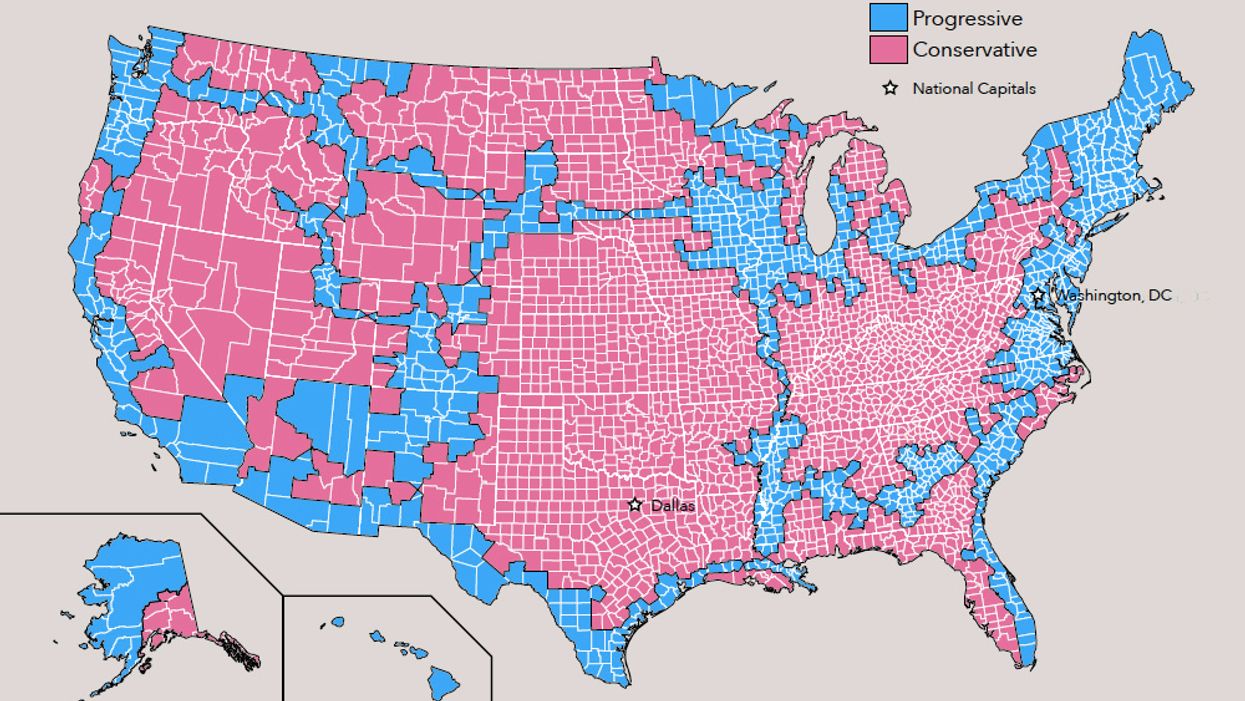 Map: How to split the USA into two countries, red and blue - Big Think